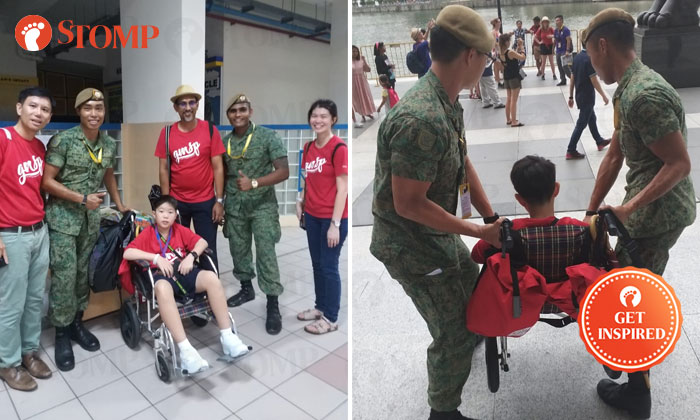 Emmanuel's parents shared with Stomp how the officers escorted their son from his school to the Padang for the parade and back again last Saturday (July 6).

The Primary 5 student has myopathy, a disease of the muscle in which the muscle fibers do not function properly, and had just undergone surgery in June.

Despite being on medical leave and being too weak to walk, Emmanuel expressed his desire to watch the NDP rehearsal.

"He didn't want to miss his chance to watch the parade with all of his classmates," his mother said.

"I'm so thankful to the school's principal, Mrs Jennifer Choy, and the teachers-in-charge for arranging for Emmanuel to be escorted to the Padang by Army officials.

"The officers went above and beyond by escorting Emmanuel from school to the Padang via public transport and carrying him in his wheelchair up and down the stairs.

"They even escorted him after the parade and brought him safely back to his school at about 10.30pm."

Emmanuel's mother told Stomp she did not manage to get the names of the officials but said she is very grateful to them for looking after her son.

"I'm so proud of our armed forces," she said.