Are you the owner of these two parrots found at Fernvale Rivergrove? 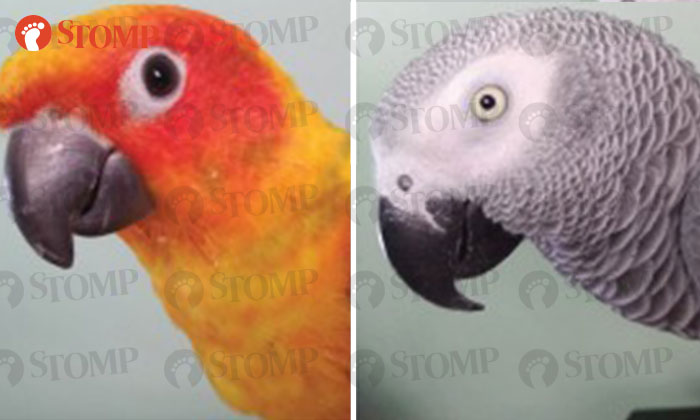 Stomper John is looking for the owner of two parrots that he found near Block 471C Fernvale Street.

John told Stomp in a phone interview that he had found both the birds — a Sun Conure and an African Grey — within one day of each other back in December 2017.

The birds were found perched on trees.

“The birds couldn’t have flown there on their own since their wings are clipped.

“They also couldn’t have walked by themselves to the trees and climbed them either. So I think that someone must have left them there.

"The birds were also found in close proximity to each other within Fernvale Rivergrove so they most likely belong to the same owner who left them there.”

The two parrots are currently under his care, and he hopes to locate the owner soon.

“I don’t mind keeping the birds but I need a clear answer from the owner first. I’ve placed up notices all over my neighbourhood and even asked the online community for help.

“It’s been so long but there has been no news of the owner.

“If the owner comes for them, please provide proof of ownership. For example, what the birds are able to say, and what dates they were placed there.”

Related Stories
$1,000 reward for Maltese that went missing at Telok Blangah Rise
Did you lose your wallet near Kovan MRT Station?
Have you seen this pair of Ray-Ban sunglasses? I left them behind after a GrabCar ride
More About:
lost and found
parrots
pet