Are they dancing? Monitor lizards go at it in Admiralty Park 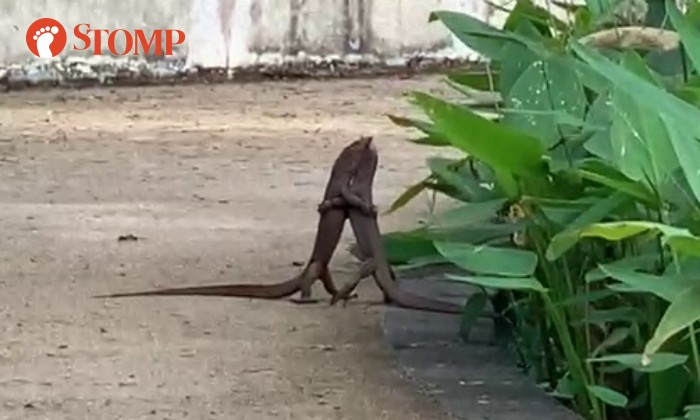 But then these were monitor lizards, not lounge lizards.

The two reptiles were actually wrestling each other at Admiralty Park in Woodlands.

Sharing videos of the lizards as well as snakes he took in the park recently, Stomper Karthik said that he goes there regularly.

He told Stomp: "My office is close to Admiralty Park. We go for a lunch walk inside the park. Actually, it's a mini forest.

"We encounter lots of monitor lizards, monkeys, tortoises, otters sometimes and recently, we saw a lot of snakes around."

The video at first shows the two smallish lizards standing on their hind legs with their "arms" wrapped around each other.

If you played some music to them moving back and forth together, they could be tripping the light fantastic. At one point, one lizard even appeared to dip its dancing partner.

But after about a minute, the stronger reptile pushed the other down until the losing lizard finally gave up and scurried away in defeat as the other chased it into the shrubbery.

At least these criiters were going at it in a relatively secluded area. Last month in Thailand, two large monitor lizards were hugging it out in the middle of the street and holding up traffic.

HUG IT OUT: Two wild monitor lizards locked their arms in a battle over territory in Thailand — and it’s at once...