Appeal for witnesses: Motorcycle left with multiple damages during hit-and-run in Yishun when owner was not around 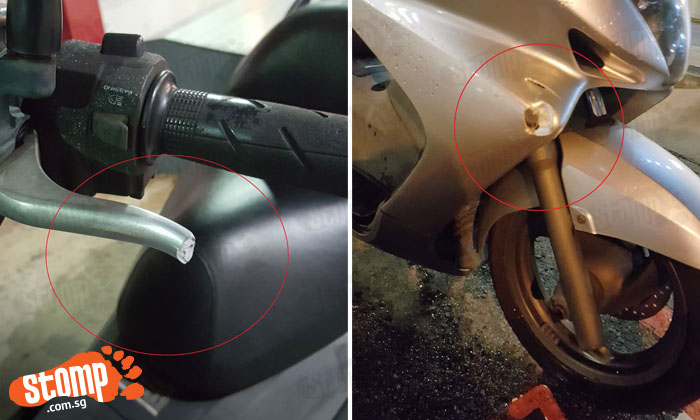 Stomper Siong Seng's motocycle was damaged during a hit-and-run accident the a carpark near Block 841 in Yishun on Feb 2.

In a telephone interview, the Stomper said he first noticed that the motorcycle was not in same the position as when it was parked.

Upon further investigation, he found out that there was damages on his vehicle.

Photos he took show a hole on top of the front wheel, a broken brake lever and scratches on several parts of his motorcycle.

"At 1.25am, after I left, I noticed my bike was out of position. It had been knocked down by someone.

"It was left slanted on its side stand instead

"After doing some inspection, I had concluded that the fellow hit the right side of my bike and it landed flat on the left.

"The main stand was dented it cannot be used."

Siong Seng has made a Police report about what happened.

The Stompwe would like to appeal to the public for information about the hit-and-run.

Kindly email as at stomp@stomp.com.sg or drop us a text via WhatsApp at 9384 3761 if you have information about what happened.