Appeal for witnesses: Man lands in ICU after tree branches fell on his head at Woodlands Waterfront 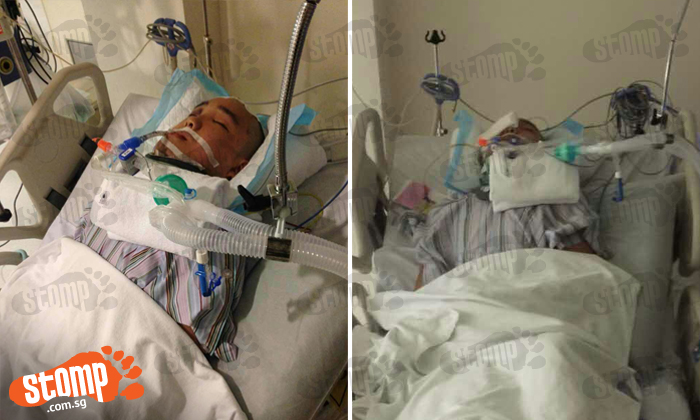 A man was left critically injured after tree branches fell and hit his head, at Woodlands Waterfront along Admiralty Road on July 20.

Stomper Jonathan, the victim's brother-in-law is appealing for witnesses to the accident, which took place at about 6.30am to 7am that day.

He sent in photos showing the victim in the Intensive Care Unit (ICU) and as well as those of the accident site.

"My brother-in-law met with an accident and is still in the ICU.

"We are still appealing for witnesses to find out what actually happened.

"What we know now is that the tree on the opposite lane fell off and hit the lamp post. Therefore, the thick tree branches fell and hit his head.

"According to some info, both lanes were blocked after the accident. The rest of the motorists were diverted to use the walkway to pass through, so that's why we hope someone had taken pictures.

"Police said the tree may have fallen onto the head of my brother-in law-but they are still Investigating it."

Jonathan hopes that anyone who had taken photos of what happened that day can share them, so as to shed light and further understanding on the accident.

If you have any information or photos, please write in to stomp@stomp.com.sg or WhatsApp 9384 3761.