Appeal for witnesses: Biker, pillion rider hospitalised after accident with taxi and trailer on PIE 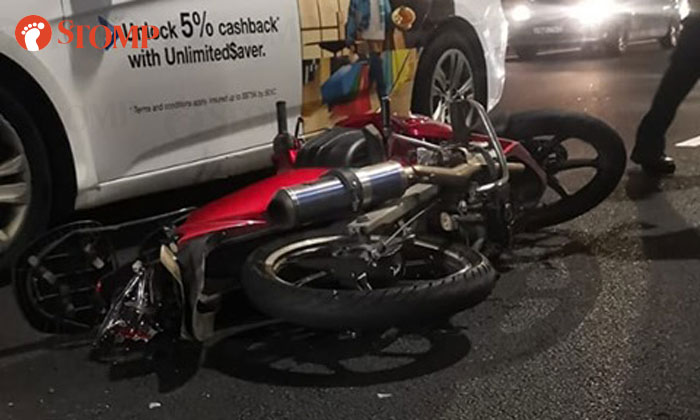 A motorcyclist and his pillion rider were taken to hospital after an accident with a taxi and trailer along the Pan Island Expressway towards Changi Airport on Tuesday evening (Oct 29).

In response to a Stomp query, the police said they were alerted to the accident at about 7.07pm.

"The male rider and his female pillion, both aged 29, were conveyed conscious to Changi General Hospital and Kandang Kerbau Hospital respectively," a police spokesman said.

Stomper Kristeena, a friend of the couple, alerted Stomp to the accident and is appealing for witnesses on their behalf.

"My friend and his wife are still in hospital," she said.

"The accident happened on the Eunos Flyover, after the Jalan Eunos exit.

"They were most likely hit from the back by a vehicle.

"The huge impact caused the motorcycle to hit the ComfortDelgro taxi in front of them.

'The motorcycle was also badly damaged.

"We are appealing for eyewitnesses or in-car footage of the accident."

If you have any information regarding the accident, kindly contact Stomp at stomp@stomp.com.sg or WhatsApp 9384 3761.