Appeal for witness: Biker and pillion rider left lying on the road after accident at Paya Lebar 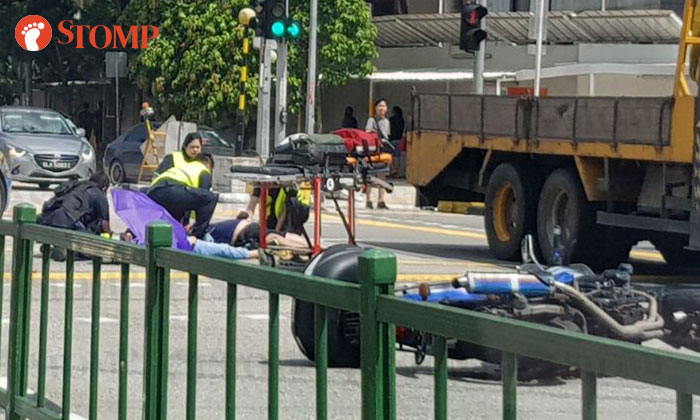 An accident involving a motorcycle and a car happened at a traffic junction between Paya Lebar Road and Sims Avenue on Saturday (Feb 3) at around 11.37am.

Stomper Alim was driving past the vicinity and alerted Stomp to the incident.

In a photo sent by Alim, a motorcycle could be seen lying on the road.

Lying a short distance away from the motorcycle were two injured victims -- a male biker and a female pillion rider.

Paramedics could be seen attending to the victims.

Said Alim: "They looked like they were badly injured.

“There was a massive jam at the place due to the accident. While I was there, I saw that the paramedics were in the midst of moving the biker onto a stretcher.

"The pillion rider was still on the road."

Asked if he had seen what happened, Alim said that he only came across the aftermath and does not know what happened exactly.

In response to a Stomp query, a police spokesman said: “On Feb 3, at 11.37am, the police were alerted to an accident involving a car and a motorcycle at a junction of Paya Lebar Road and Sims Avenue.

"The rider, a 38-year-old male and his pillion rider, a 35-year-old female were conscious when conveyed to Changi General Hospital (CGH).

The relative of the victims has reached out to Stomp to appeal for witnesses to step forth.

Kindly contact Stomp at stomp@stomp.com.sg or WhatsApp 9384 3761 if you have any information about the accident.

Related Stories
Why did cabby jam on brakes for no apparent reason -- causing accident?
Female driver of P-plate car crashes into tree opposite West Spring Primary School at Bukit Panjang
Driver rams into woman causing fractured ribs, then tells victim: "I thought I hit a dog"
More About:
accident
motorcycle