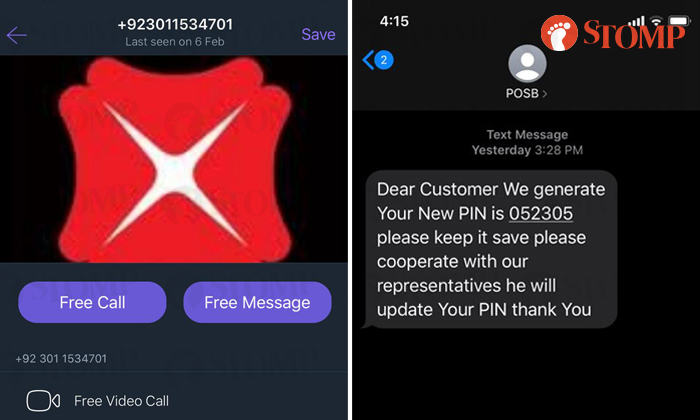 A woman lost her life savings of nearly $60,000 after falling victim to a scam in which she received a 'threatening' Viber call from someone claiming to be from the police and DBS Bank.

Stomper Cho, a 38-year-old quantity surveyor, said she received a call via messaging platform Viber on Feb 6, at around 3.10pm.

The call was from a foreign number that started with +92, the country code for Pakistan, and had the DBS logo as its profile picture.

Cho, a Myanmar national working in Singapore to support her elderly parents, recounted: "The caller pretended to be from DBS Bank and said somebody was hacking my account.

"He asked me to provide all my bank details, including a One-Time Password (OTP), in order to lock my account."

Cho said she felt nervous and pressured by the caller, who apparently "threatened and coerced" her, which was why she followed his instructions.

The Stomper explained: "He claimed he was calling from DBS and the Singapore police, which I understood as the police from DBS.

"He said someone was hacking my account, which was why he was trying to protect and set up my account, then said 'give me your passport number'.

"I told him I did not remember my passport number and only knew my Personal Identification Number (PIN).

"He replied, 'No, no, madam. This is police case. I need your passport number.'

"I tried looking for it in my email, which took quite a long time, and then he said, 'Give me your username also, ok.

"He then sent me a new generated pin that was stated to be from 'POSB' and I believed him.

"After I gave every single information to the caller, I received SMS texts from DBS and realised there were multiple transactions from my DBS account to bank accounts in India.

"That was when I realised that the caller had stolen my money and made unauthorised transfers to others."

According to Cho, a total of $59,150.99 in her DBS account was transferred to four State Bank of India (SBI) accounts:

Cho reported the incident to the police and DBS 10 minutes after the scam call.

Stomp understands that DBS Bank is in touch with the customer regarding the matter.

Cho said she is not hopeful about her situation but wishes to share her story to prevent others from going through the same thing.

She added: "All of my hard-earned lifelong savings were stolen. I hope everyone can sympathise with my case and share this so that it will not happen to others."

Responding to Stomp queries, a DBS spokesman said there has been an increase in fraudulent calls that impersonate its staff to obtain sensitive personal or bank account information.

"These fraudulent calls are made as regular calls or on instant messaging/chat apps such as Viber and WhatsApp, and usually display DBS' logo as the profile picture," said the spokesman.

"Impersonating DBS staff, the scammer would claim that a customer’s account is experiencing issues and may attempt to lure the customer into providing their internet banking and/or credit card details, or perform fund transfer(s) to another account.

"Please be careful and stay vigilant of such calls.

"DBS will never call via such instant messaging/chat apps, neither will the bank ask customers to provide internet banking and credit card credentials, OTP or digital token approval, nor request customers to conduct fund transfers.

"If you suspect that you have been a victim of fraud, contact us immediately at 1800-339-6963. Please also visit http://www.dbs.com/security for our latest security alerts and go.dbs.com/bsharp for security tips."

In an advisory on Feb 25, the Monetary Authority of Singapore (MAS) also warned of such scams and advised members of the public to take the following precautions:

To seek scam-related advice, members of the public may call the anti-scam helpline at 1800-722-6688 or go to www.scamalert.sg.

Earlier in January, a 60-year-old widow had her life savings of $54,999.06 wiped out from her DBS account after falling victim to a Viber scam.

Similarly, the victim was told that her DBS account was being hacked and after she provided her personal banking details, had her money transferred to foreign bank accounts through multiple transactions.