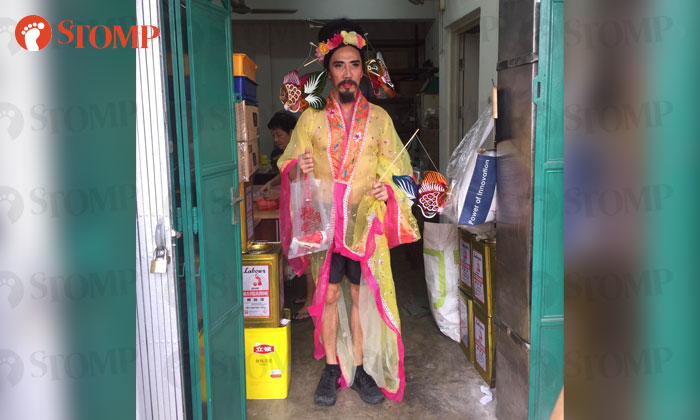 Submitted by Stomper Will, Belle

Singapore's very own male 'moon goddess' was spotted once again. This time, he was seen buying mooncakes and hanging around Chinatown.

In an earlier Stomp story, it was reported that Stomper Will also came across the man on board an MRT train on Sep 28.

He was clad in a flashy traditional Chinese costume, catching the attention of commuters.

The Stomper said that the man alighted at Chinatown MRT Station.

Photos sent by Stomper Belle yesterday (Oct 2) might give us an idea as to what happened after that.

The pictures show the man buying mooncakes from a store at Chinatown. In a telephone interview, the Stomper said she saw him at the store at around 3pm.

Said Belle about the unusual sight:

"Omg, saw the moon goddess man too and he was really buying mooncakes! So cute! Everyone was taking pictures and he was very friendly."

In another photo, the celestial celebrity of sorts can be seen walking on a stage that had been set up for the Mid-Autumn Festival.

The Stomper believes that he was not involved in a performance and was just taking a stroll on the elevated platform.

A fourth photo shows him sitting at the bus stop beside two Caucasians.

If the both of them were in town for a 'uniquely Singapore' experience, they probably got one.

Have a look the photos of the moon goddess in the gallery above.