Another group of people allegedly gather to gamble, this time at Marine Parade carpark 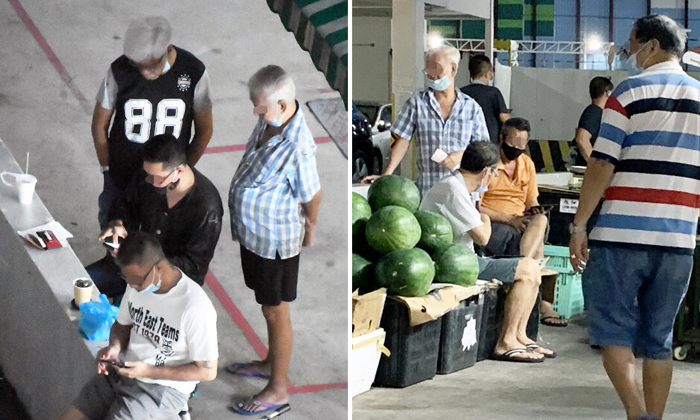 In the second such case in four days, another group of people were spotted in a gathering, this time at a Marine Parade carpark, allegedly to gamble illegally.

Several were standing in small groups while others sat around. Most were holding their mobile phones and believed to be watching a video clip.

Shin Min also reported that there were beer bottles and food items next to them, and most did not maintain a safe distance of 1m from one another.

A resident who wanted to be known only as Miss Guo, told Shin Min the gathering takes place at least three days a week.

She said: "There will be a bigger group on Wednesdays and during the weekends. And they will be watching videos of horse racing or football matches with the volume turned up loud."

A cleaner, who wanted to be known only as Mr Zhuo, said the group would sometimes appear at 1pm and stay for at least four hours.

The authorities should put a stop to this, he added.

Shin Min reported that some people went had gone up to another man standing near a fruit stall and passed him money, although there was no visible transaction of any goods.

Mr Zhuo added that the group used to gather near the wet market at Block 50A Marine Terrace but moved to the carpark recently.

Shin Min also reported previously that a group of about 40 people were gathering at a bus stop in Marsiling for alleged gambling activities.

In response to media queries, the police said they are aware of illegal gambling activities and will be taking enforcement actions against such activities, including possible breaches of safe distancing measures.

The police said:"Members of the public should lodge a police report if they have witnessed illegal gambling activities."