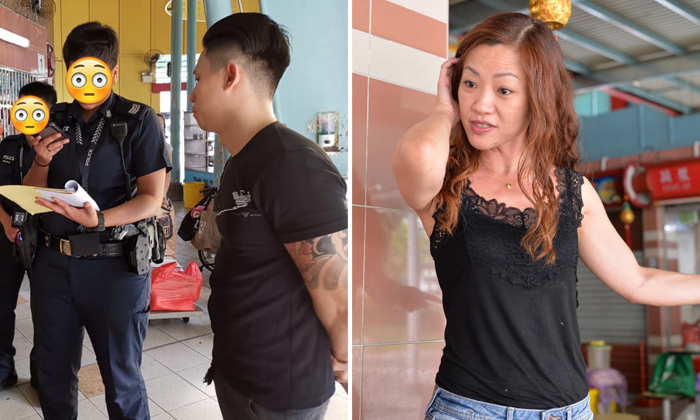 The woes of Singapore's most infamous 'kway chap lady' are far from over, as yet another debt collection company turned up at her stall on Saturday (Jan 5).

Ms Tan, who runs a stall at Cheng San Market & Cooked Food Centre in Ang Mo Kio, previously made headlines after videos of her in a stand-off with King Alliance Debt Recovery employees went viral.

The 49-year-old also opened up about her affair with a married businessman, who reportedly employed debt collection companies to recover a debt of $350,000 from her.

Expressing regret over the illicit relationship, Ms Tan told local media that she is bankrupt and estranged with her four children.

The One Debt Recovery Pte Ltd wrote in the caption: "The AMK kway chap stall you are unlucky we are handling your case too (sic)."

Stomp understands that police officers who responded to the scene had asked the debt collectors to leave, which they complied with.

When contacted by Shin Min Daily News, The One Debt Recovery said it had been asked by the businessman's female secretary to recover a sum of $200,000 from Ms Tan and her husband.

Mr Lin, a 32-year-old partner at The One Debt Recovery, revealed that the sum was for a 'break-up fee' but declined to provide further details.

According to Mr Lin, Ms Tan's husband had been manning the stall when debt collectors showed up on Saturday afternoon.

Ms Tan's husband reportedly said: "You come then come, I am used to it."

Meanwhile, Ms Tan told Shin Min that it was futile for debt collectors to approach her husband as he does not have money, nor is the kway chap stall under his name.

She added: "If my husband gets dragged into the matter, then we will just apply for bankruptcy at most. There's nothing to be embarrassed about."