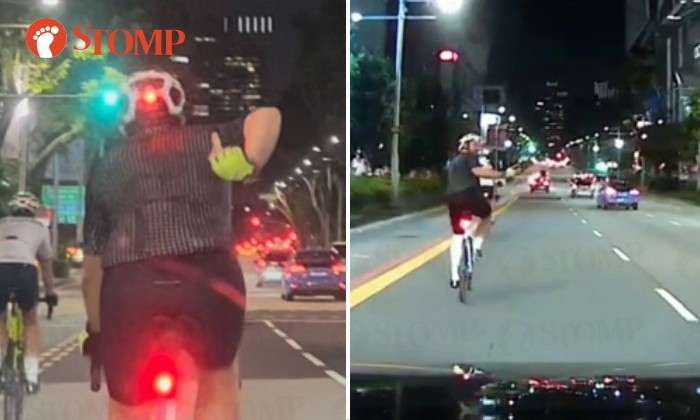 A cyclist was caught on a car dash cam giving a driver the finger three times after the driver did not give way at Orchard Road on Tuesday night (Sept 6).

Stomper S, who is the driver, shared the video, which was recorded without audio.

The video, starts at the traffic junction before Tangs, where the driver first encountered two cyclists riding in front of him just before 9.30pm.

"I was changing lanes because it was a red-line bus lane in front and I overtook one of them," said the Stomper.

"I did not slow down to allow him to change lanes before me because there were cars behind me and his speed was relatively slower. If I did allow him to do so, he would be in front of me at a much slower speed and I would risk hitting him.

"Moreover, my car and other cars on the road were moving at a certain speed and I would need to break hard to slow down to allow him to go first, risking a collision from the back.

"The guy got angry and dangerously sped up in front of me to point the middle finger at me multiple times, shouted vulgarities, cycled with one hand or no hands when filming with his mobile phone and cycled right in the middle of the road.

"While the traffic stopped (for the red light) in front of Concorde Hotel, he angrily and aggressively banged on my side window. I opened the window and he started scolding. I said he was cycling dangerously and he claimed I was driving dangerously. It lasted just a minute or so."

The first cyclist, who had also stopped, looked back, not knowing what was going on. The second cyclist later rode up to the first cyclist and appeared to tell him what had happened.

Riding off after the light changed, the second cyclist took out his phone to record the driver again while steering with one hand.

The Stomper said he had made a police report.

He told Stomp: "The investigating officer called to say that to take action, they need the identity of the guy, but unfortunately, I do not have his identity."

In response to a Stomp query, police confirmed that a report was lodged and are looking into the matter.