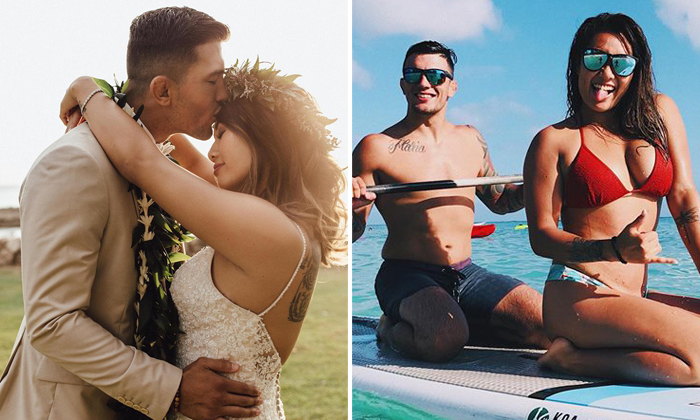 Held at the Lanikuhonua Cultural Institute, the vintage-themed beach wedding was attended by around 100 guests.

Lee, who was born in Vancouver to a Chinese-Singaporean father and Korean mother, posted several photos of the intimate ceremony on her public and personal Facebook pages.

Calling it the "best day ever", the 22-year-old wrote: "Couldn't be happier. Living the dream with my best friend!"

She also told The New Paper: "It was an absolute dream come true. Bruno is my number one person to talk to about everything I am feeling and what our plans are for the future."

The couple met in 2015 in Singapore after Lee joined martial arts academy Evolve MMA, where Pucci has been working as a Brazilian jiu-jitsu instructor since moving here in 2012.

They got engaged last September.

According to TNP, the couple will be honeymooning in Santorini, Greece, after accompanying Lee's family on a cruise around Europe, in celebration of her parents' 25th anniversary.

Lee said: "Bruno and I will both be based out of Hawaii (instead of dividing their time between Hawaii and Singapore) as we intend on living here after our wedding and honeymoon.

"However, regarding our career and training, we will still be fighting in One Championship and continue to train hard alongside each other."

Nevertheless, Singapore will always hold a special place in the couple's hearts.

Lee added: "We have made so many memories together in Singapore, especially the night when Bruno proposed at the Botanic Gardens."

View more photos of the couple's wedding in the gallery.