Angela Lee injured after falling asleep while driving her Audi in Hawaii: Car flipped "5 to 6 times" 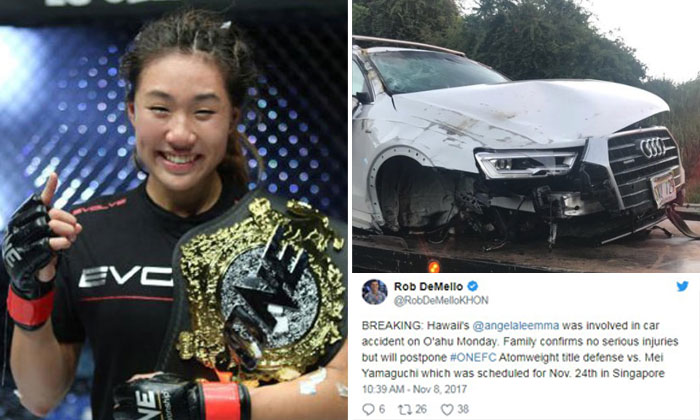 MMA champion Angela Lee was involved in a serious car accident yesterday (Nov 7) after falling asleep behind the wheel while on her way to morning training in Oahu, Hawaii.

According to the police, her car flipped over five to six times.

"She was driving to her morning training at the gym when she fell asleep," wrote Sityodtong.

"Miraculously, she survived with only a concussion, some minor burns, and a banged up body.

"If she was not wearing a seatbelt, it would have most certainly been a different story.

"I saw photos of the damaged car, and it was a complete wreck."

BREAKING: Hawaii's @angelaleemma was involved in car accident on O'ahu Monday. Family confirms no serious injuries but will postpone #ONEFC Atomweight title defense vs. Mei Yamaguchi which was scheduled for Nov. 24th in Singapore pic.twitter.com/CZOpDo8Ueg

There were several scratches and dents and it was missing its tyre on its right front right side.

The 21-year-old champ was scheuled to have a rematch against Mei Yamaguchi for the women's atomweight title on Nov 24 in Singapore.

Sityotdong said that she has been pulled out of the match:

"Angela will not be competing on November 24. We are all blessed and relieved that Angela will make a full recovery.

"Please join me in sending love, prayers, and positive energy to Angela and her family."