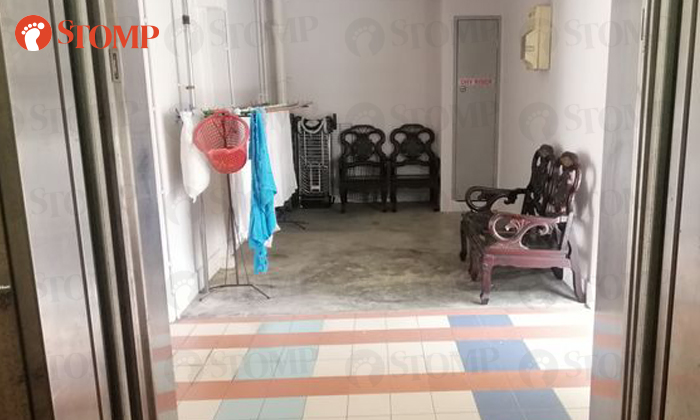 A household who placed chairs at the lift lobby of a Housing Board (HDB) block in Ang Mo Kio has been notified to keep their personal belongings within their unit, said the town council.

Stomper Anonymous said her neighbours on the third floor of Block 116 Ang Mo Kio Avenue 4 have been "treating the public lift lobby as their own personal space".

Anonymous told Stomp: "The chairs have been there for very long already, even before the circuit breaker.

"People would sit there and smoke. There are times when I come back from work and see more than five men smoking at that exact area.

"Previously, they cluttered the area with laundry and mattresses. The mattresses were removed after someone complained about the fire hazard, but I think it's even more dangerous now."

In response to a Stomp query, Nee Soon Town Council said it received feedback about the chairs earlier this week and had carried out an inspection to the area.

A spokesman added: "A notice was served to the unit to notify them to keep their personal belongings within their unit.

"The town council will continue to monitor on this."