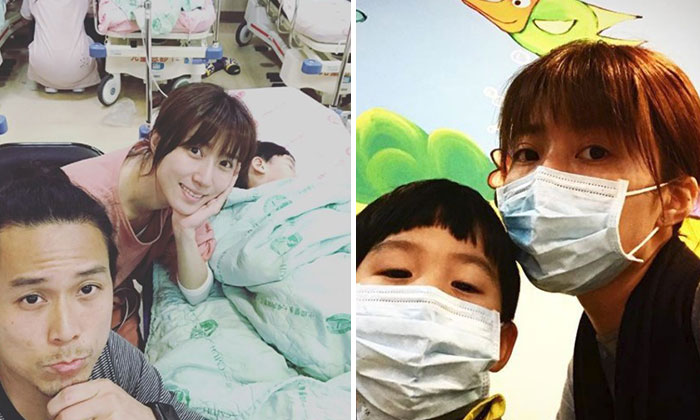 Andie Chen and Kate Pang had a scare on the eve of Chinese New Year, after their three-and-a-half-year-old son fell ill and had to be admitted to the intensive care unit (ICU) twice.

When Lianhe Wanbao contacted the couple on Friday afternoon (Feb 16), Kate told  reporters that they had brought their son and daughter over to Taiwan so they could spend the Chinese New Year with Kate’s family.

“My son started running a fever two days ago. He became better after a nap.

“However on Lunar New Year’s Eve, he started having a rash and was feeling itchy all over his body. His fever was 39 degrees, and we quickly rushed him to the ICU.

“The doctors gave him a shot, he started feeling a lot better. We then went back to my father’s house for our reunion dinner.

“After the meal, we wanted to head back to our apartment. My son who was running suddenly stopped and started shivering.

“I asked him what was wrong but he didn’t speak. When we reached the apartment, he said he could breathe.

“We quickly rushed him to the ICU again where he was given two more injections, and put on the drip. He was on the drip until 5am the following morning, before the doctors told us he was allowed to return home.”

Reporters noted that Kate sounded tired over the phone.

In an Instagram post on the day of the incident, Kate also revealed that she was so tired that she had vomited.

However, she was more worried about her son’s condition, as it was the first time he had been so ill.

She also described how her heart ached when he cried as he was getting the injections.

Asked about the incident, Andie told reporters that he has asthma.

He revealed that his son also suffers from the condition, albeit it being much milder.

When the boy told the couple that he could not breathe, Andie became worried as he thought that it was a triggered asthma attack.

In an Instagram post, Andie described how he felt as he was carrying his son and consoling Kate at the same time.

He added that he had hoped to be as dependable as a rock for the both of them, but he was actually very worried.

“My husband was very reliable and stayed with our son the whole time. Even I was so tired that I fell asleep.”

She also said that their son’s condition was much better now, and the boy later wished the reporters a ‘Happy Chinese New Year’ over the phone.