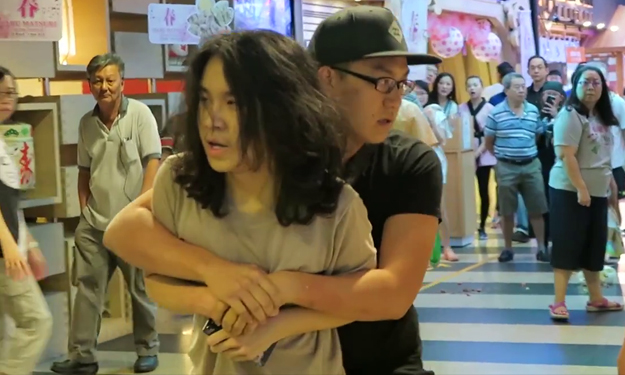 A video circulating online shows controversial teenage blogger Amos Yee being grabbed on to and 'attacked' at Jurong Point.

The one-minute clip that was uploaded on Facebook shows a youth holding Yee in a tight grip as the latter repeatedly shouted, 'Help me!'

However, his pleas for help went ignored as nobody tried to free him, despite a large crowd watching the scene unfold.

Although a man can be seen speaking to the youth at the start of the video, it is unclear what their conversation is about as the guy did not seem to relinquish his hold on Yee at all.

At one point, the person filming the video even said, "Just a regular day at Jurong Point" before sniggering.

The youth is said to have been accompanied by his girlfriend, who can be seen simply standing around and using her phone while the drama occurred.

The person who filmed the video has also recounted what he saw in avlog (video blog) dated May 29 on YouTube. It is titled, 'Amos Yee in his natural habitat'.

He said that he thought the incident was a 'molestation case of a theft case' at first glance.