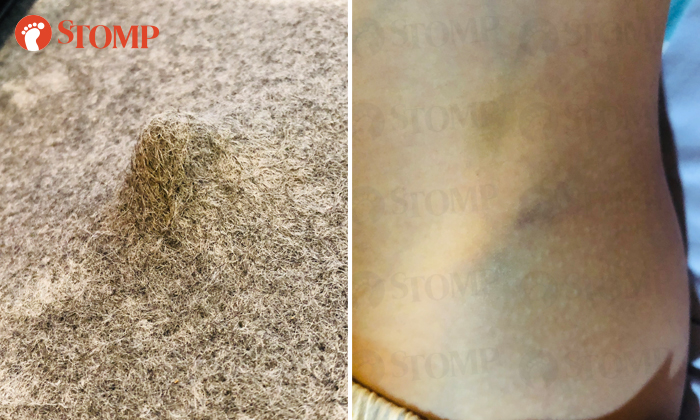 Mr Koh told Stomp in a phone interview that the incident occurred at around 2pm to 3pm on Basement 2 of the mall, outside NTUC FairPrice.

He recounted the incident: "I was shopping and making payment at the supermarket. Right after coming out from the cashier area, my son tripped and fell on a temporary platform.

"The platform was raised, uneven and its length was equivalent to that of five people standing side by side.

"I believe the platform was made up of several wooden planks and covered with a carpet. I also saw three nails sticking out from the platform." 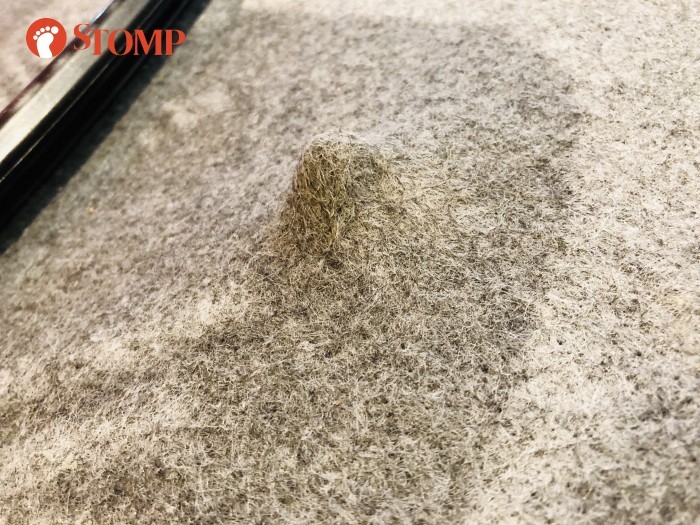 Stomp understands that the makeshift platform was meant to cover exposed tiling during tile replacement works.

Mr Koh said he is unsure if his son had tripped over the raised platform itself or a nail.

According to the Stomper, his son cried immediately after falling, and was left with bruises on his left arm and left rib area. 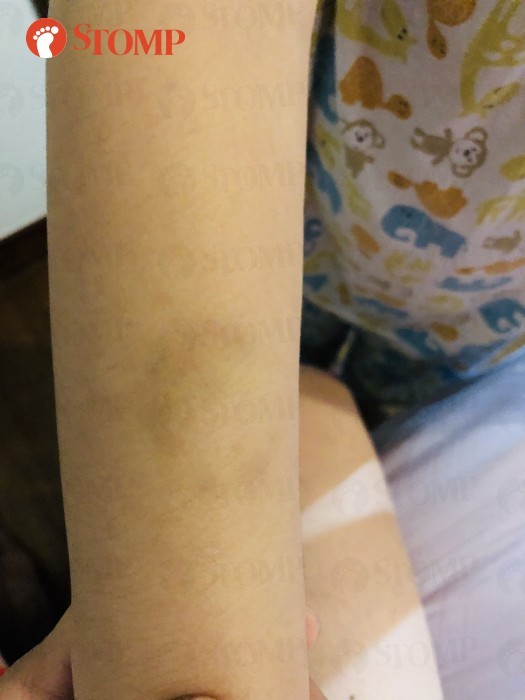 He added: "I reported the incident to NTUC Fairprice. After 15 minutes of waiting, a manager spoke to me and said he would inform the mall's management.

"At around 6pm, I received a call from the mall. The person recommended that we go see a doctor, but there were no further calls and no follow-ups after that.

"What I am saddened by is that nobody seemed to care."

As his son has a ventricular septal defect (VSD) and had previously undergone heart bypass surgery, Mr Koh is exceptionally concerned.

He told Stomp: "We are seeing the doctor next Monday for professional advice through scanning."

Mr Koh also expressed concerns that other children and elderly people might hurt themselves on the platform and nails.

"This should not be treated lightly," he said.

Responding to Stomp queries, an AMK Hub spokesperson said on Thursday (Oct 18) that the area has since been cordoned off and the mall has been in touch with the child's family.

Said the spokesperson: "A staff member from NTUC FairPrice notified the AMK Hub team about an incident involving a boy at Basement 2 near the supermarket on Oct 13.

"We have immediately cordoned off the area.

"We have since been in touch with the boy's family and extended our sincere apologies. AMK Hub would like to render as much assistance to them as possible.

"The safety of our shoppers is of utmost importance to us. We are working closely with our contractor to step up and prioritise inspections and rectifications of interim measures during this renovation period to minimise such incidences in the future."