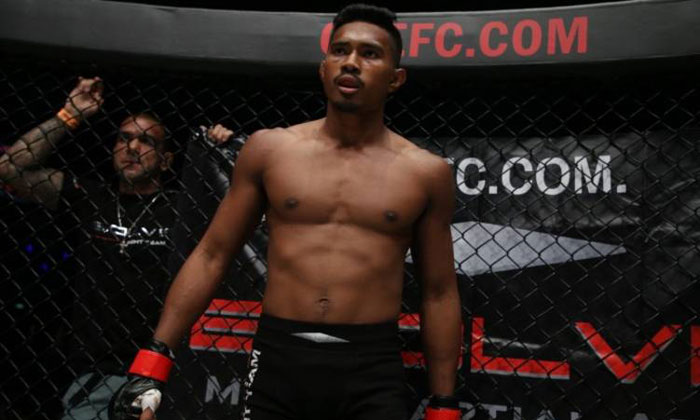 He has waited a long time for this, but 24-year-old Amir Khan is ready to answer the call of destiny and claim the first World Title of his young career.

Standing in front of members of the global media at the official ONE: CONQUEST OF CHAMPIONS kick-off press conference in Manila on Tuesday (Nov 20), Khan fielded questions regarding his toughest test to date.

The Singaporean is scheduled to square off with former lightweight titleholder Eduard Folayang of the Philippines in a five-round encounter for the vacant ONE Lightweight World Championship. Khan believes it is his time to shine and capture the highly-coveted gold strap.

"I'm so happy to be fighting again in Manila. This is actually the second time. I fought here four years ago. I have all due respect for [Eduard] Folayang, he is a great martial artist. But I am coming for the title. I’ve worked extremely hard on my game since the beginning of my career, and I am one hundred per cent confident of becoming world champion.

"Winning that title means everything to me. Me and my coach, we have a solid game plan for this fight. The odds may be stacked against me. I'm fighting the hometown hero, but I won't let it affect my performance," Khan told media.

Folayang, on the other hand, was confident of victory, despite giving up nearly a decade in age to his younger foe. The 34-year-old Baguio City native is one of the promotion’s top lightweight talents, and one of the most celebrated sports stars from the Philippines.

"Thank you all for coming and for all the support. Last year, things didn’t go as I expected. I lost the title. But this year is a new chapter. I worked extremely hard to come back here for another opportunity at the belt.

"I've been inspired by my teammates, my coach, and all the fans. This is the biggest bout of my career, and I am excited to give the best performance of my life," Folayang said.

Also in attendance at the Press Conference was reigning ONE Heavyweight World Champion Brandon "The Truth" Vera, who returns to action after nearly two years away from professional competition. Vera will take on Cage Warriors heavyweight champion Mauro "The Hammer" Cerilli who hails from Italy, in the main event of ONE: CONQUEST OF CHAMPIONS.

Vera appeared confident of victory, despite the long layoff.

"I owe the Philippines a lot for inspiring me to work harder than I ever have before. Am I ready after spending two years away from the cage? Hell yes. I've prepared very hard for this bout. I've trained every day, in between traffic, shoots, and everything in the middle.

"I am confident of victory. I’m still hungry and I want it more now. Mauro [Cerilli] is a worthy opponent, he's been knocking guys out while I was away, and I am in no way underestimating him," Vera said.

Also announced at the Press Conference was ONE Championship’s new athleisure business, in partnership with Zilingo, as well as an online store that offers official ONE merchandise to fans all across the world.

ONE: CONQUEST OF CHAMPIONS goes down on Friday (Nov 23) at the Mall of Asia Arena in Manila, Philippines.