American tourist, 23, breaks her back trying to escape pervert in Thailand whom she asked for directions 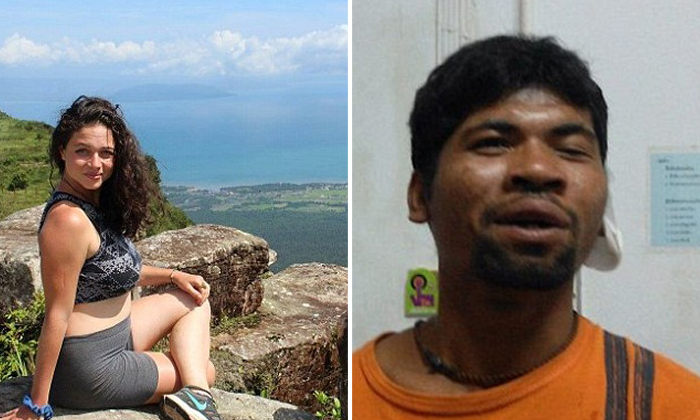 A young teacher from New York, 23-year-old Hannah Gavios, could be paralysed after falling from a cliff while trying to escape from a sex attacker in Thailand.

According to AsianTown, Gavios got lost on Railay Beach in the resort of Krabi and went into a local tourist shop to ask for directions. A local worker, identified as Apai Ruengvorn, 28, offered to show her the way.

"They said it was dangerous to do at night so they told me to follow one of their workers," she recounted.

However, he started leading her into the jungle and up a hilly path.

“I was a little suspicious but I was tired and wanted to get home," she said according to National Post. She innocently followed him before realising she was in danger.

"While we were walking he grabbed me and was holding me down and trying to take off my clothes," she said.

She punched her attacker in the face, bit off part of his ear and ran through the darkness. However, since it was pitch black, the escape attempt failed and she fell off a 45-metre cliff, fracturing her spine.

She then spent hours yelling for help in the darkness, while the man searched for her with his cell phone flashlight.

Apai molested her as she lay helpless, feeling like a vegetable and not being able to move anything.

"I was stuck with this crazy person. I was in the woods in the bushes with wild snakes crawling on me while he was still continuing to harass me.

"He got on top of me. He took off his pants and masturbated on me.

"He didn't rape me but he did everything else. I really thought I was going to die.

"I honestly didn"t know what to do. I just had to remain calm. whenever I screamed he was choking me so I had to try to keep cool and stay friendly with him.

"As soon as it got lighter I started calling for help. He kept saying 'no police no police'.

He was "crying and apologetic", but he also shouted “no, no” when she yelled for help.

Finally after a few hours when it was close to dawn, he left and returned with a few other Thai men, who helped to move her before a medical rescue team arrived.

It is unclear if the damage will be permanent.

Related Stories
30-year-old avid jogger sexually assaulted and strangled to death in broad daylight in New York City
Chinese tourists abandoned by unlicensed 'budget' tour guides in Thailand
Bangkok tuk tuk driver appears to be 'signalling' before tourists get robbed by motorcyclist
Chinese tour guide stabs tourist to death in front of her kids -- for sitting at his 'usual place' at Kenyan lodge
Pervert gropes woman on crowded bus in Turkey -- and gets beaten by all ladies on board
Female tourists arrested for dancing topless and baring breasts in Phuket joyride
More About:
Thailand
sex
pervert
inappropriate
crime
injured
tourists