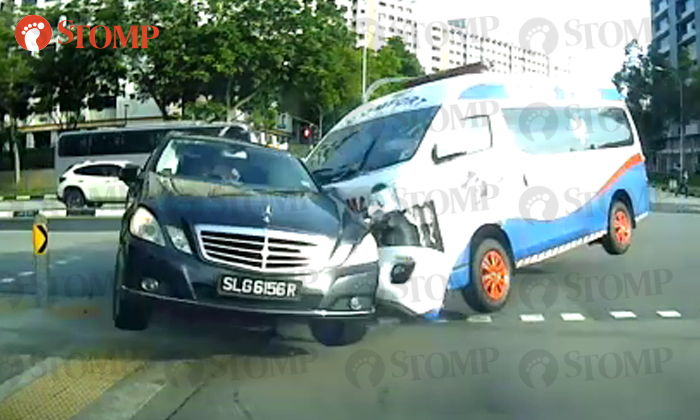 Two men were taken to hospital after a Mercedes and an ambulance collided at a traffic junction in Woodlands on Monday morning (Nov 12).

The Singapore Civil Defence Force (SCDF) told Stomp that it responded at around 8.10am.

Both drivers, aged 37 and 44, were conscious when taken to Khoo Teck Puat Hospital in an SCDF ambulance.

Stomp understands that there were no passengers on both vehicles at the time of the incident.

Several Stompers alerted Stomp to a video showing how the Mercedes had been making a right turn when the ambulance, from Comfort Ambulance & Services, crashed into it.

The impact of the collision dislodged the ambulance's front bumper and caused the Mercedes to surge towards a bollard.

Facebook page ROADS.sg uploaded a second video showing the accident from another angle.

Another view of ambulance crashing into Mercedes

Police said both drivers, aged 37 and 44, were conscious when taken to...

Stomper Allan also contributed a photo taken at the scene. 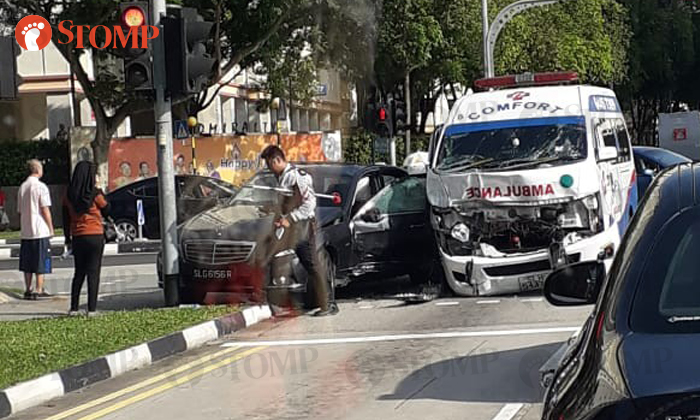 Related Stories
Car and van flip over after collision on TPE, 3 people including 1-year-old toddler injured
Cabby opens taxi door to check on accident with car, causing 2 motorcycles to crash
2 separate chain collisions on TPE: Car 'pyramid' in one accident, 2 injured in another
More About:
accident
ambulance
injured