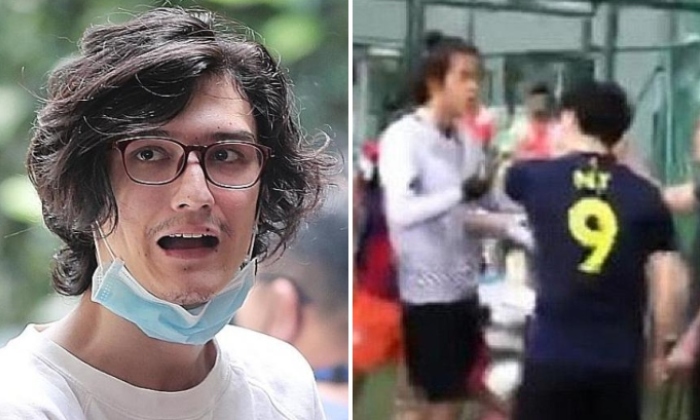 In the midst of a heated argument during a football match, a man headbutted an opponent and broke his nose.

Yesterday, Nicolas Amet Wen Cai, 31, the coach and captain of amateur football team FC138, was jailed for four weeks after pleading guilty to one count of voluntarily causing hurt.

The victim is a 34-year-old Chinese national who was a player from Ranger United, another amateur team, and a video of the incident has circulated online.

In February last year, both teams were having a friendly match at East Spring Secondary School.

About five minutes before the end of the game, players from both teams argued over a foul by an FC138 player.

Players from both sides began pushing each other in the middle of the field.

Deputy Public Prosecutor Derek Ee said Amet was among the players on the field.

He added: "Initially, he was observed to be trying to protect his teammates by pushing away the players from Ranger United."

But the situation deteriorated when a goalkeeper from Ranger United ran towards an FC138 player and aimed a jump kick at him.

Amet and the victim, who were face to face, swore aggressively and pushed and shoved each other.

DPP Ee said: "Amet was no longer behaving in a defensive manner but was instead observed to be aggressive towards the victim."

Suddenly, Amet headbutted the victim, causing him to bleed profusely and fall to the ground.

Amet and his teammates then fled the field.

When the police arrived, they found the victim unconscious.

He regained consciousness soon after and was taken to Changi General Hospital with a nose fracture and a laceration above his eyebrow. He was discharged two days later.

Stomp had also reported about this incident back in February 2019 and included a video of the scuffle.