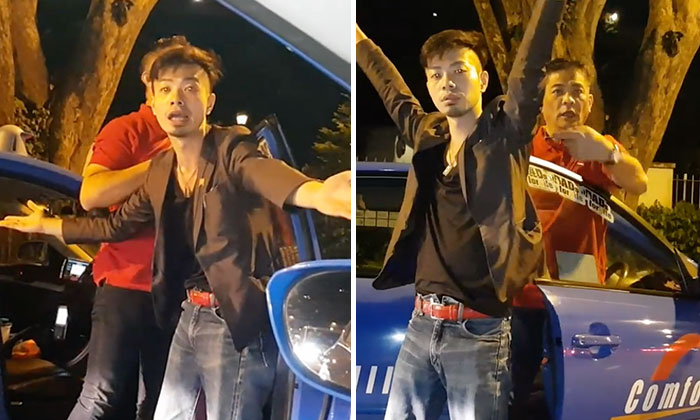 A ComfortDelgro taxi driver got into a dispute with a passenger who was allegedly drunk.

In a video posted by user Batumalai SK on the Singapore Taxi Driver Facebook group, the male passenger is seen standing by the opened door next to the driver seat, refusing to budge.

It is noted that the passenger had a dazed expression on his face, and also appeared to be slurring his words.

He can be heard saying in the video:

The taxi driver then shouts, “Hello, police! Police!”, seemingly to garner the attention of police officers nearby. The cabby then pushes the passenger away from the door.

The passenger, wobbly in his footing, struggles to maintain his balance.

Batumalai who was taking a video of the incident then asks if they were facing some sort of trouble.

In the meantime, he continues standing on the road with both hands held up.

The taxi driver gets into his cab and leaves. The passenger even does a spin, pointing at the cab as it goes off.

According to Batumalai, the incident happened opposite a taxi stand in Clarke Quay. He wrote in his post:

“Members please be careful with this drunk passenger who flagged down a taxi and created problems along the roadside.”

Many of the Facebook users also shared Batumalai’s sentiment.

“Remember to lock your door. Once they manage to get in, they won’t get out.”

Related Stories
Uncle kicks taxi and breaks windscreen wipers while little boy tries to restrain him
Who's right, who's wrong? Cabby and passenger argue over whose route to take for flat fare ride
Men 'hijack' and board taxi that others already flagged down, offer cabby extra $10
More About:
dispute
ComfortDelgro
taxi