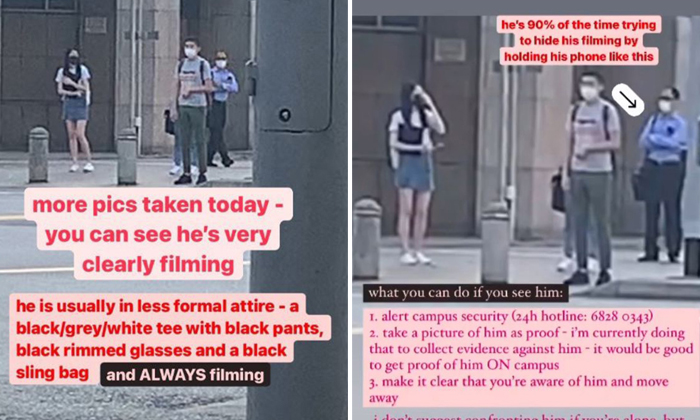 Charlotte Chong and David Sun
The Straits Times
May 5, 2021

A man who was allegedly stalking students at the Singapore Management University (SMU) has been arrested.

A police spokesman confirmed with The Straits Times on Friday (May 7) that a report was lodged against the 44-year-old man, who has been arrested on suspicion of being a public nuisance.

Late last month, several posts alleging that the man was spotted in the vicinity of the SMU campus began circulating on Instagram.

The posts, believed to be by an SMU student, said the man began appearing in the area around the week of April 19 and was taking videos of female students.

Photos in the posts showed him wearing a light blue formal shirt and sunglasses.

The user warned fellow students to be wary of the man, who was purportedly jailed in 2019 for stalking and harassment.

The social media posts were later made private.

In response to queries, an SMU spokesman said the school was aware of the matter but was unable to comment further as investigations are ongoing.

"SMU is committed to providing a safe and secure campus environment," he said.

"The university takes a serious view of all issues relating to the safety and well-being of our students and staff, and works closely with the relevant authorities and our community to manage and resolve any security-related issues."

The spokesman added that the school has security cameras positioned at key locations and regular patrols by security guards.

Staff and students are also advised to report any suspicious behaviour.