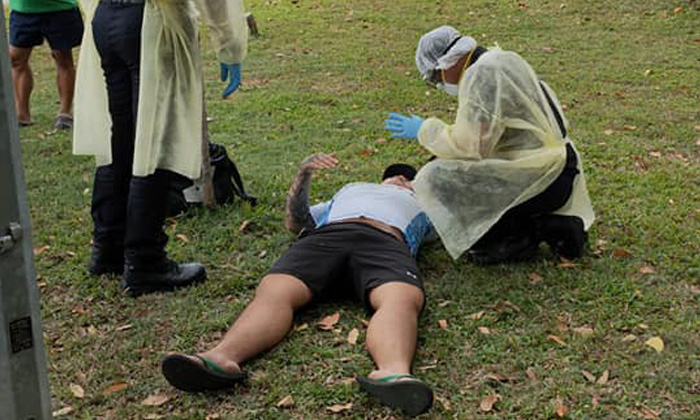 An allegation circulating online that an enforcement official kicked a rider off his e-scooter is false and police are now investigating the case, the Land Transport Authority (LTA) said on Friday (March 20).

Various posts on social media platforms had shared the allegation along with pictures of an enforcement officer and a man lying on the ground.

LTA said in response to queries that the incident happened on Thursday afternoon, but the account circulating of what happened was "unfounded and false".

Its active mobility enforcement officers (AMEOs) in Yishun had spotted the man riding a non-compliant e-scooter on a footpath, said LTA.

"The rider did not stop when signalled by AMEOs but instead turned around and attempted to escape. In the course of evasion, he lost control of his device and fell," said LTA.

"As his particulars were being taken down by an AMEO, the rider tried to flee a second time. Another AMEO then held onto him to prevent his escape and both fell in the process."

E-scooters were banned from footpaths since last November amid growing safety concerns about the use of the device. Strict enforcement of the ban kicked in from this year.

LTA has referred the case to the police for further investigations.

It added that it takes a serious view of allegations made against its officers.

"If substantiated, we will not hesitate to take action. At the same time, we will not condone baseless accusations to discredit our AMEOs," said LTA.

"We urge members of the public to exercise responsibility when posting information online, and to refrain from spreading unsubstantiated allegations."

Last December, LTA suspended a Certis auxiliary police officer after he was caught on video sending a speeding e-scooter rider flying with a kick.

The incident stirred controversy and prompted police investigations as well.

LTA had said then that it was investigating offences by the rider, who had used a non-registered e-scooter and failed to stop his device when required to do so.