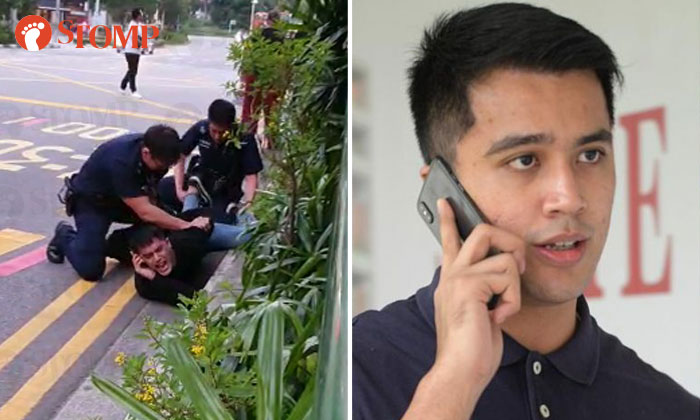 Controversial actor-singer Aliff Aziz is defending calling his father for help while he was being pinned down by police on Nov 10.

In the videos, he can be heard shouting on the phone and calling his father for help while officers pin him down and try to handcuff him.

The police told Stomp that their officers came across two men arguing at Orchard Road at 6.40am.

Aliff was subsequently arrested for causing annoyance to the public when drunk under the Liquor Control Act.

He defended his right to call his father in a video posted on his mother's social media account, reports The Straits Times.

The 28-year-old said there is nothing improper in reaching out to family in moments of crisis, even if he is "40 or 50 years old".

He added that he has received many messages of support while admitting that 2019 has been a tough year for him.

"Hopefully, I will come out of this stronger," he added.

In the video, that was shot in a hawker centre and showed the faces of his father and sister, Aliff said he cannot talk much about the Orchard Road incident even if it would encourage more wild speculation over what happened.

"I hope there is a reward for me in the afterlife, not because of the good I've done, but because there are many people who like to talk bad behind me," he added of his resolve to bounce back.

No stranger to controversy, the Singaporean celebrity faced theft charges in September for allegedly stealing one million rupiah ($97) and $300 from Indonesian actress Raja Yunika Perdhana Putri while in a hotel room.

He is also said to have stolen a packet of cigarettes and a lighter at a Starbucks outlet in Plaza Singapura.

His divorce from Bella Astillah, 25, after almost three years of marriage also made headlines amidst allegations that he cheated on her several times.

Both of them were criticised for maintaining contact after their divorce.