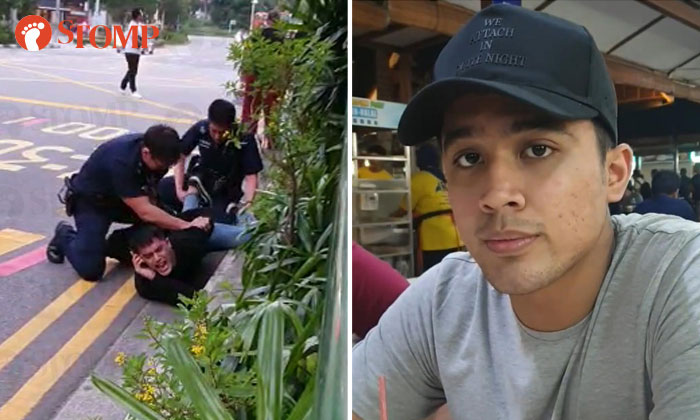 Singapore actor-singer Aliff Aziz was slammed by netizens when videos popped up online of his alleged drunken behaviour in Orchard Road.

On Monday (Nov 18), he was charged in court with disorderly conduct at 6.25am on Nov 10, at a public area near Orchard Towers.

Aliff was arrested and was later released.

Media outlet Berita Mediacorp reported that if he is convicted, the 28-year-old could face a fine of not more than $2,000 or a jail term not exceeding six months, or both.

In that incident, Aliff was also mocked by netizens for still giving trouble to his parents.

In the video, he can be heard saying: "You talk to my father... I never resist."

Aliff has had a difficult year, with his divorce in May from Malaysian actress Bella Astillah, 25, after almost three years of marriage, making headlines.

She said he had cheated on her several times.

They have a two-year-old son.

Aliff's reputation took a further hit after the divorce, when he was charged in court recently over theft.

He allegedly stole one million rupiah (S$97) and $300 from Indonesian actress Raja Yunika Perdhana Putri while in a local hotel room.

He is also said to have stolen a packet of cigarettes and a lighter at a Starbucks outlet in Plaza Singapura.

Aliff, who has thanked his fans for their support after the Orchard Road incident, is drawing comfort from his son.

The latest photo in his social media account shows the two together, with Bella's more frequent trips to Singapore for work allowing father and son to get together more often.

Rumours of a possible reconciliation between the couple have also surfaced since the divorce.