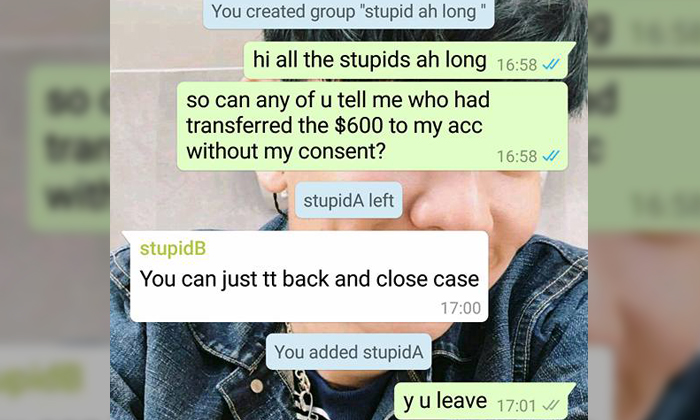 When someone, supposedly a loan shark, transferred $600 to a stranger, he probably was not expecting the chain of events that he set off.

The stranger, Facebook user Kym Tan, shared what happened after she discovered the money in her bank account -- and it is more dramatic than your favourite television show.

It all started when Kym realised that an "idiot out of nowhere transferred $600 into my account". She also received a screenshot of the transaction and a messaged that said: "Thank you for supporting us".

The person claimed that Kym had borrowed the money from him, declined when she wanted to transfer the sum back to him and instead, requested that she "pay back $800 in five days".

Soon after, a second party contacted Kym. He claimed that he was a boss and that his worker had misused company funds by "anyhow crediting" the $600.

Things took an even stranger turn after Kym created a group chat with both men, whom she named "stupidA" and "stupidB":

In her last update (for now) on Dec 27, Kym shared how someone identifying himself as "Alex" said that "Jacky" had already been fired and forked out the $600 from his own pocket.

"That Jacky told me to ask you if you can return him the $600," wrote Alex, adding that he would give Kym the account number to transfer the money if she was willing to return it.

We have a feeling this is not the end of it.

Related Stories
Stomper 'orders' 3,000 iPhones from seller who offered 'buy 2 get 1 free' promo
From bros to foes (kinda) after man refuses to return $100 that he borrowed
Woman tells Grab driver "you will soon meet with accident" as he can't pick up kids below 1.35m
More About:
funny
fail
text
loansharks