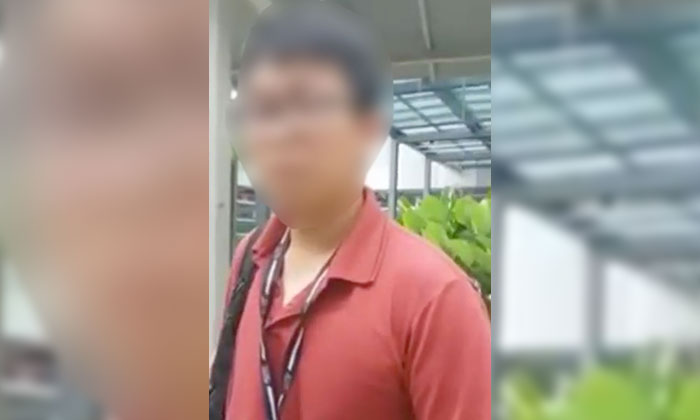 A video of a man confronting an NEA (National Environment Agency) officer after he and a female companion were allegedly caught smoking on a sheltered walkway, has been circulating on Facebook.

In the video shared by All Singapore Stuff, the man could be heard saying to an officer dressed in a red polo shirt:

“If you want my particulars, sure. Fine.

“But it’s raining and you guys are doing this, it’s really reprehensible.”

He then handed his IC (identification card) to the officer.

Next, the officer asked the woman for her particulars, to which she refused.

The officer proceeded to explain the consequences of not cooperating, but was interrupted by the man who pointed the phone lens at another officer in black, saying that they were recording the incident on body cameras.

The woman then told the officer in red that they had only been smoking on the sheltered walkway as it was raining, a point reiterated by her companion.

“Yar, on a normal day, I would smoke out here.

“If it’s not raining, I will not stand under the shelter.”

The woman continually apologised and asked for a chance.

However, the officer was unmoved and asked for her particulars again, prompting the man to taunt the officer.

He challenged the officer to take down his particulars and asked why he was holding onto his IC, saying:

“Why are you holding on to my IC?

“By right, you’re not supposed to hold on to my IC, you know.”

The officer explained that he had to record down his particulars, which was why he had asked for the man’s IC in the first place, but the man retorted:

“You have my particulars, you can record it right now.

“Why are you still holding on to my IC?

“You’re refusing to record down my particulars.

“You know you do not have the right to hold onto other people’s IC?”

The man continued to protest about the ‘unreasonable’ situation, but was promptly reminded by the officer that ‘it was not a good idea to scold a public servant on duty’.

However, his response only elicited a tirade from the man.

According to the NEA website, smoking is prohibited in an estimated 32,000 premises and locations, such as entertainment outlets, shopping malls, office premises, hospitals, schools, cinemas, and bus-stops, as well as general areas such as corridors, covered walkways, lift lobbies, stairwells and entrances to buildings.

NEA takes enforcement against all offenders for smoking in prohibited areas and individuals caught smoking in a prohibited place are liable on conviction to a fine of $200.