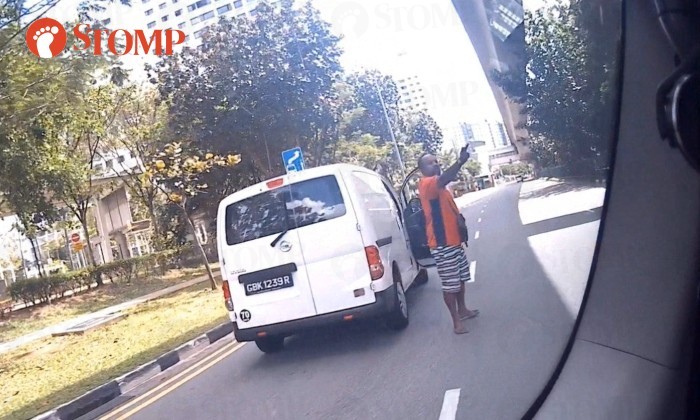 A van driver was caught on video pointing his middle finger and challenging a driver to fight at Punggol Way on Saturday (July 25).

Stomper KM alerted Stomp to the incident that was caught on his in-car camera.

According to the video's timestamp, the incident occurred at 11.23am.

"I was turning right from Punggol Field into Punggol Way at the junction near Block 258B Punggol Topaz when a van sped up to cut into my lane," the Stomper shared.

"I pressed the horn to warn the van driver of the danger of getting into the same lane and he gestured aggressively, cursed and swore at me.

"He then suddenly applied the brake and came out of his van barefooted.

"I did not think it was rational to alight and get into a fight so I changed lanes and drove off," he added.

As KM was driving off, the van driver pointed a middle finger at him.

"I could hear him cursing and swearing too," the Stomper shared.

KM also added that he found it dangerous to have drivers on the road who do not respect the safety of others.