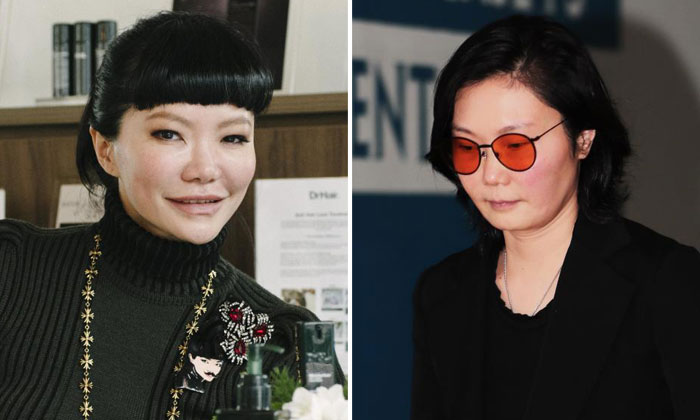 Well-known aesthetics doctor Georgia Lee is being sued by a movie and TV producer who claims she had been misled into investing $2 million in Dr Lee's brand of skincare products in return for a 5 per cent stake.

Ms Anita Hatta, who was executive producer of TV series Asia's Next Top Model in 2012 and 2013, is alleging fraudulent misrepresentation and minority oppression in her suit. She is seeking the return of the $2 million or a buy-out of her shares.

The case, which opened in the High Court on Tuesday (April 9), was described by Ms Hatta's lawyer as a "a high society game of bait and switch".

In wooing Ms Hatta's investment, Dr Lee painted a rosy picture of the three companies -DRGL, DRGL Spa and CIEL - she had set up to package, market and sell her line of DrGL products, said lawyer Wendell Wong in his opening statement.

Mr Wong said while her companies were technically insolvent, Dr Lee treated them as her "personal piggy bank" by misusing their funds. When Ms Hatta later raised questions, she got only "skin deep" explanations from Dr Lee, said the lawyer.

Ms Hatta testified that she was introduced to Dr Lee in 2006 by her personal assistant, who was a patient. In 2012, Dr Lee approached her for a $4 million investment to grow her skincare brand, she said.

Ms Hatta said she invested $2 million after Dr Lee claimed to have invested about $14 million in the companies, that sales have exceeded $5 million, and that the companies were worth $40 million. There was no formal contract, but Ms Hatta claimed there was a mutual "understanding" that she would be consulted on key business decisions.

"I believed her, I trusted her as a doctor and a friend," Ms Hatta told the court.

However, financial statements revealed that total sales from 2009 to 2012 only amounted to $1.6 million, and that Dr Lee did not invest $14 million in the companies, she said.

Ms Hatta said the fact that she signed shareholders' resolutions to approve financial statements did not absolve Dr Lee, the sole director of the companies, of any liability for fraudulent misrepresentations.

She said she suspected possible mismanagement in 2015 and engaged Ernst & Young to review the financial statements. This uncovered various accounting discrepancies, including substantial repayments made by the companies to Dr Lee, despite being insolvent.

In late 2015, Dr Lee told her about an intended joint venture with a company called Adval. However, Ms Hatta was later excluded from negotiations. Ms Hatta questioned the sale of substantial assets to Adval in January 2017, which she contended was a move to leave her with debt-ridden shell companies.

Dr Lee's lawyer Chong Yee Leong acknowledged there were mistakes in the accounts, which have since been rectified.

But he said Dr Lee did not make the alleged misrepresentations.

He said it was inaccurate for Ms Hatta and her accounting expert to rely only on the companies' financial documents to determine the value of Dr Lee's investments.

Mr Chong said records showed that Dr Lee had spent $13.3 million on developing the brand, but had not recovered everything from the companies. He said that contrary to Ms Hatta's claim of an "understanding" that she would be consulted on key decisions, Dr Lee was fully responsible for the decision-making and business strategy.

Ms Hatta never step foot into the companies' offices and was more concerned with social, marketing and media events concerning the companies and was quick to publicise her associations with celebrities, said Mr Chong, who also questioned her about her investments in film and TV.

She told the court that she invested "less than $1 million" in Asia's Next Top Model.

She also invested between $100,000 and $200,000 in movies such as A Fantastic Ghost Wedding starring Hong Kong actress Sandra Ng and actress-director Michelle Chong's Already Famous.

These investments, with funds from her parents, were mostly loss-making, she admitted.

Related Stories
Man allegedly cheated victims of over $10k by offering rooms and cars for rent, then going MIA
Woman cheated of over $68k by BF she met on Tinder, realises she's not his only victim
39-year-old man arrested in Balestier hotel for allegedly cheating $260k
More About:
doctor
celebrity
courtroom