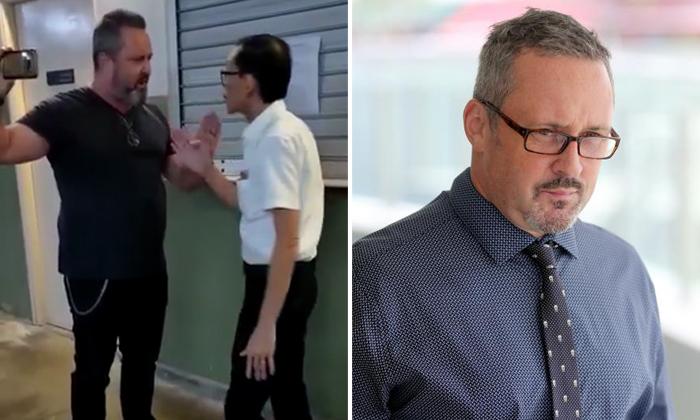 The drunken owner of an advertising firm, who could not find an unlocked exit at Roxy Square shopping centre, assaulted a security supervisor even though the latter offered to show him the way out.

The 47-year-old Singapore permanent resident, who owns The Creative Mills, was captured on video punching the older man and the clip went viral earlier this year.

The single blow caused Mr Lim to fall backwards onto the floor and break his spectacles.

On Monday, District Judge Christopher Tan noted that Mills had punched Mr Lim's face, which is a "sensitive" part of the body.

The judge also said that the attack was "entirely unprovoked", stressing that "general deterrence (was) relevant" in this case, as security officers are often in a vulnerable position.

The court heard that Mills and a friend had gone to a pub at the shopping mall in East Coast Road and ended their drinking session at around midnight on April 4.

Mills was drunk after consuming about a third of a bottle of whisky.

He walked around Roxy Square and became frustrated when he could not find an unlocked exit.

He spoke to a security officer on duty and demanded to see the man's supervisor over the perceived lack of unlocked exits. The officer took Mills to see Mr Lim, who noticed that the Briton reeked of alcohol.

Mr Lim offered to show Mills an exit where he could leave the building. Despite this, Millswas still unhappy and quarrelled with the security supervisor "over the propriety of the number of available exits in the building".

Noting that Mills was getting more aggressive, Mr Lim asked his colleague to record the encounter.

Deputy Public Prosecutor Vincent Ong said that Mr Lim did not scold or shout at Mills. Mr Lim then decided to walk towards an exit to show Mills the way out and the Briton followed him.

The DPP said: "As they rounded a corner near the loading bay, the accused blocked the victim's way with his body. When the victim tried to move past, the accused used his right foot to try to trip the victim.

"The victim stumbled but did not fall. However, the accused instead lost his balance and almost fell. The accused then got angry and used his right fist to punch the victim once on the right side of his face. The punch caused the victim to fall backwards to the floor and his spectacles to break."

Mills hurled an expletive at Mr Lim and left the scene, the court heard. The older man phoned the police before going to Bedok Polyclinic where he was found to have tenderness over his right eye socket.

He was given 12 days of medical leave and incurred more than $1,000 in medical expenses. He also paid nearly $250 to replace his broken spectacles.

Following the incident, Mills returned to Roxy Square to apologise to Mr Lim for what he had done and was caught by the police soon after. He had since made a voluntary compensation of $2,000 to Mr Lim.

DPP Ong urged Judge Tan to sentence Mills to two weeks' jail, saying that the attack was "unprovoked and thuggish".

Defence lawyer Ramesh Tiwary pleaded for his client to be given either a fine or a jail term that was shorter than two weeks.

The lawyer added that Mills had been diagnosed with major depressive disorder and was "utterly remorseful for what he had done".

For assault, the Briton could have been jailed for up to two years and fined up to $5,000.