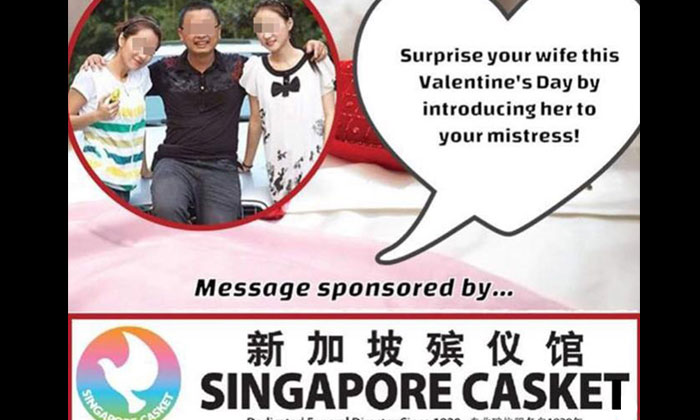 An advertisement featuring Singapore Casket has been making its round online.

The advertisement which was first spotted on Facebook on Thursday (Feb 8), showed a man with two women, and a bizarre message.

Read the text: "Surprise your wife this Valentine’s Day by introducing her to your mistress."

The advertisement specifically names Singapore Casket as a sponsor, placing up its logo, address and contact details.

Netizens have reacted to the faux advertisement, with many saying that Singapore Casket was ‘inhumane’ in encouraging men to ‘court their deaths’ just for the company’s profits.

However, others found it hilarious, and even said that it was the ‘best advertisement of the year’.

While most netizens viewed it as a joke, some have taken a more serious view, saying that the advertisement does more harm than good.

In response to media queries, Singapore Casket has issued an official statement, clarifying that neither the advertisement nor the contents were from the company or representative of the company’s views.

This was actually a fabricated work of mischief and someone had intentionally spread fake information.

The company also hopes that the public will disregard the message.

According to Lianhe Wanbao, the company has sought legal action, although it did not disclose how much damage was done to its reputation.