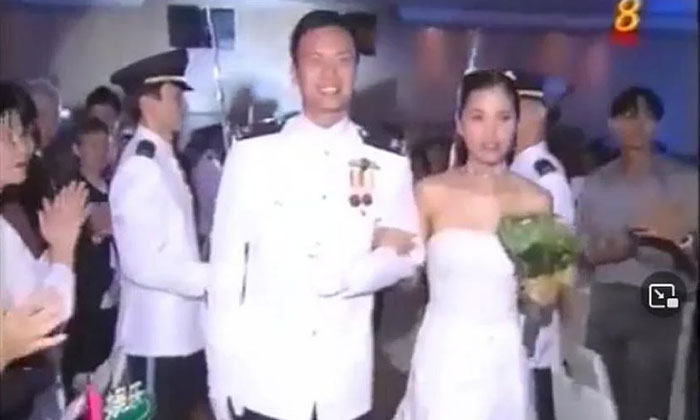 Home-grown actress Zoe Tay took fans down memory lane with a video of her 2001 wedding.

The MediaCorp ah jie (big sister in Mandarin) registered her marriage with former pilot Philip Chionh in 1995 and they held their wedding ceremony at a hotel in 2001. They have three sons aged 11, 14 and 17.

Tay, 54, posted the almost 12-minute video on Instagram on Monday. She wrote: “I have lots of feelings after receiving this video today. Thanks for your love and blessings as I will cherish them.”

She recalled waking up at 3am to prepare for her big day – attending the church ceremony, holding the Chinese tea ceremony, returning to her parents’ place for a meal and having the wedding dinner.

“It was a busy day filled with memories and happiness,” she wrote. “Very tired, but very happy.”

Tay, who recently starred in the legal drama Dark Angel, wrote: “I want to take a good look at that day. See some familiar faces? I have not seen several colleagues for a long time. How is everybody? I hope everyone is well.”

Tay used hashtags such as #MyWedding, #BeautifulMemories and #MyPrinceCharming in the post.

There were fun moments in the video, such as Chionh and Tay having to kiss two of the swordbearers, and actress Patricia Mok playing Tay in a humorous sketch.

The post received more than 11,600 likes and over 150 comments as of Tuesday afternoon.

Actress Sharon Au wrote in Chinese: “So many beautiful memories from that day. Thanks for allowing me to be one of the bridesmaids on the most important day of your life.”

She added in English: “And thank you Philip for the biggest hongbao. We were the luckiest bridesmaids ever.”