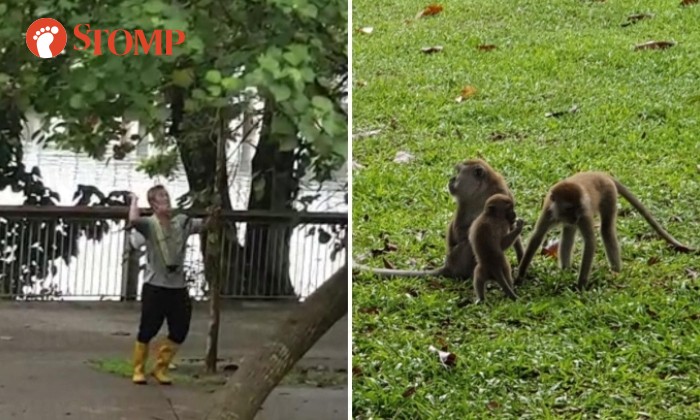 The Animal Concerns Research and Education Society (Acres) said it does not condone hostility towards wild animals after a man was seen using a broom to hit monkeys at Woodlands Waterfront Park.

This incident, which happened on Sunday (Nov 22) at 7.10am, was caught on video by Stomper Paul who was exercising in the area.

In the video, the man, who appears to be a cleaner, can be seen walking towards a tree and using a broom to hit the monkeys hiding among the leaves.

Paul mentioned that even though the monkeys cannot be clearly seen in the video, they were high up in the trees.

"I was just doing my warm ups before my morning run when I suddenly heard someone shouting very loudly," Paul said.

"I moved towards the shouts and was shocked to see a cleaner using a broom to attack a family of monkeys on a tree.

"He also threw branches at them, which I thought was a very unkind thing to do.

"What if the monkeys got hurt? Or what if they got provoked and started attacking the cleaner?

"There were many joggers around and none of us felt affected by the monkeys. In fact, many of us enjoyed watching them walk freely around the park.

"So I'm not sure why the cleaner felt the need to attack them. I really hope the monkeys did not get hurt or injured."

In response to a Stomp query, Mr Kalai Vanan, deputy chief executive officer of Acres said: "The Acres crime investigation unit is aware of this case and has forwarded the information to the National Parks Board (NParks).

"We would need to establish who the man is and chat with him to find out more about why he had reacted so negatively towards the macaques.

"We hope he did not hurt himself or any macaques in the process. Regardless, such hostility towards wild animals cannot be condoned as they can cause the animals to feel threatened and defend themselves.

"Such acts also paint a negative image of the animals involved to other members of the public."

Mr Kalai also urged the public to be more tolerant of Singapore's biodiversity and to call Acres' 24 hour wildlife rescue hotline if there are any wild animals in distress.

The Society for the Prevention of Cruelty to Animals' (SPCA) executive director, Dr Jaipal Singh Gill, also said in a statement that the man appears to be frustrated and that SPCA understands that it can sometimes be challenging when encountering animals in one’s line of work.

"However, confronting animals in this manner is not justified and may further escalate the situation," Dr Gill added.

"It may also place one at risk of getting hurt. We would advise the man or his company to contact Acres or SPCA for advice on how to manage the animal-related problems they are facing."

According to NParks, here is what you should do if you encounter monkeys in the open: