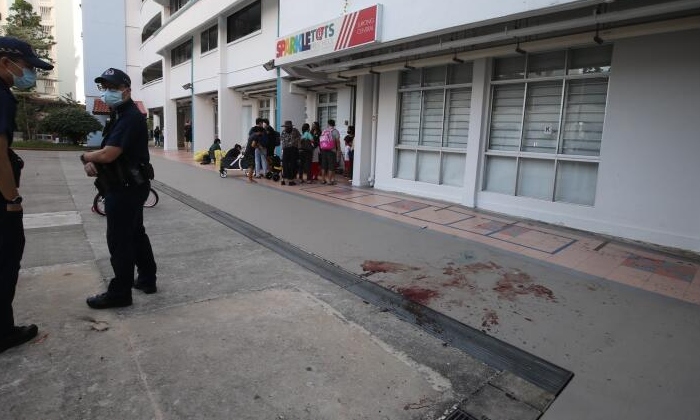 After a few failed attempts to salvage his relationship with his former girlfriend, an intoxicated man armed himself with a knife and waited for her near her home.

When he spotted the woman, Zheng Xianfeng confronted her in anger and repeatedly stabbed her in the chest and abdomen.

He did not stop even after a passer-by riding a personal mobility device rammed him.

The victim, Ms Tham Mee Yoke, 34, suffered at least 29 stab and slash wounds as well as three rib fractures. She died from her injuries.

On Wednesday, Zheng, 37, was sentenced to 12 years' jail by the High Court after he pleaded guilty to a charge of culpable homicide for fatally stabbing Ms Tham just before midnight on Feb 16, 2021, near the void deck of Block 308 Jurong East Street 32.

The Chinese national was originally charged with murder, but the charge was reduced as he was assessed to be suffering from major depressive disorder, which diminished his responsibility for his actions.

Four other charges were taken into consideration: One for hurting Ms Tham with a penknife three months prior to the killing, two for hurting his brother, and one for causing annoyance when drunk.

The court heard that Zheng met Ms Tham, a Malaysian, in December 2018 as they rented separate rooms in the same unit and entered into a relationship with her.

Zheng, who was married at the time, was also in a relationship with another woman. Ms Tham was separated from her husband and had four children living in Malaysia.

Zheng eventually divorced his wife and ended the other relationship. He shared a room with Ms Tham from September 2019 to November 2020.

On Nov 17, 2020, they quarrelled at an open-air carpark in Jurong East Avenue 1 as Ms Tham wanted to end the relationship.

During the argument, Zheng stabbed himself in the thigh with a penknife, before pinning her on the ground and cutting her. Zheng was arrested and put on bail after he was charged over the assault.

He then made several attempts to patch up the relationship.

Once, he smashed Ms Tham's phone and slapped her arm after discovering that she had exchanged messages with a man.

On another occasion, he went to her workplace reeking of alcohol but her manager warned Zheng not to harass her.

On Feb 16, 2021, he thought about his ongoing court cases and about his relationship issues with the victim and started drinking beer.

When he received a text message from the victim telling him not to harass her again, he became upset and replied saying he felt unhappy and lonely.

Zheng then left home with a knife tucked behind his back and bought snacks and alcohol. At about 10pm, he went to the void deck of Ms Tham's block and waited for her while continuing to drink.

Close to midnight, Zheng saw her near Block 308 and quickly walked towards her.

A youth, who was hanging out at the void deck of Block 309, alerted two of his friends and called the police after he saw Zheng approaching the woman.

As Zheng approached Ms Tham, she backed away from him until she reached the basketball court near Block 308.

Recalling the unhappy moments in their relationship, Zheng took the knife from his back and started stabbing the victim, who fell to the ground in shock.

One of the youths rammed his PMD into Zheng, but he continued stabbing the victim.

The victim's screams attracted the attention of residents, and at least five other calls were made to the police.

As Zheng fled from the scene, he cut himself twice on his left forearm and passed out on a grass patch near Block 307 .

One of the youths applied pressure to the victim's neck while waiting for the paramedics to arrive.

The victim did not have a pulse when she was taken to Ng Teng Fong General Hospital and resuscitation efforts failed.

Police officers at the scene followed a blood trail that led them to Zheng lying on the ground.

On Wednesday, Deputy Public Prosecutor Teo Lu Jia sought 10 to 12 years' jail, given the accused's intent to kill the deceased, and the nature and gravity of the offence which caused significant public disquiet.

She noted that the attack was vicious and unrelenting, that Zheng has violence-related charges, and that Zheng had reoffended while on bail.

He said his client would like to apologise to the victim's family and intends to pay respects to her remains after his release from prison.