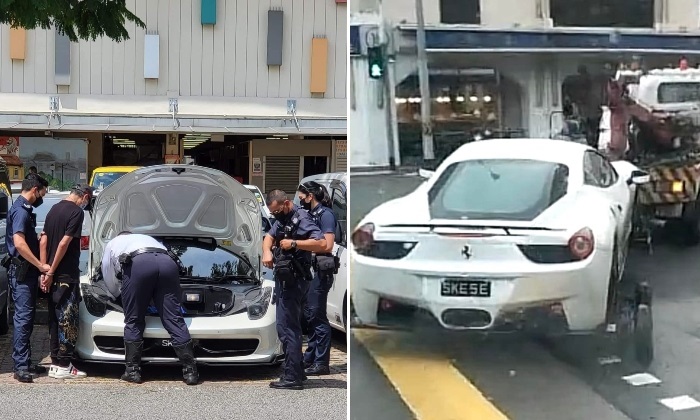 A 48-year-old male driver of a Ferrari was arrested on Tuesday (June 28) on suspicion of drug-related offences after a car accident involving his car and another vehicle.

According to Lianhe Zaobao, the incident occurred around 11.20am in Beach Road.

Photos on Facebook group SG Kaypoh show a man handcuffed next to a white Ferrari 458 Italia at a carpark near Block 10 North Bridge Road, as police officers searched the vehicle. And containers believed to contain illegal drugs are placed on the roof of the vehicle.

Police dogs were reportedly present at the scene.

The police told TNP that a call for assistance was made at around 11:23am on Tuesday after an accident involving two cars occurred at the location.

The police confirmed that a 48-year-old man was arrested on suspicion of drug offences.

No injuries were reported and there was no visible damage to the vehicles.

It was noted afterwards that the Ferrari’s road tax had expired as of Jan 28 this year.

The vehicle was towed away from the scene shortly after.