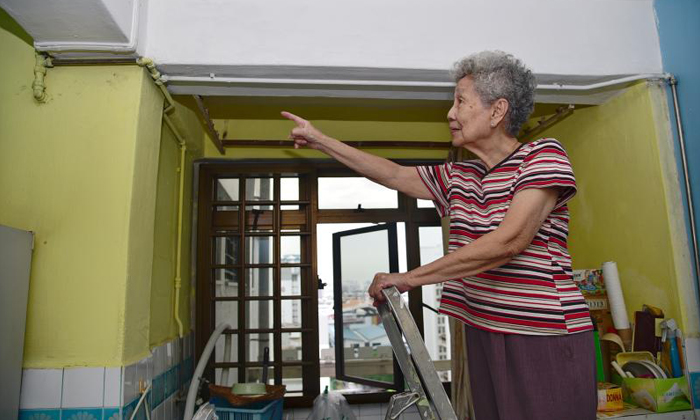 An 84-year-old widow was almost cheated of about $47,000 by two men who took advantage of her "absent-mindedness".

Madam Gan Leng Neo had engaged the services of the men to carry out minor repairs in her five-room flat at Block 27 Marine Crescent.

She issued a number of cash cheques amounting to $21,000 to the men for fixing water stains on her kitchen ceiling caused by leaking pipes.

At their request, Madam Gan, who lives alone, then gave them another cash cheque of $26,000 as final payment.

Fortunately, her neighbours intervened and took her to the bank to stop payment of the $26,000 cheque and helped her make a police report.

The police said in a statement on Sunday that they arrested two men, aged 35 and 57, last Friday for their suspected involvement in the renovation scam. Cash amounting to $2,300 was also seized.

One of the neighbours, who declined to be named, told The New Paper yesterday that she and another neighbour, Madam Bek, noticed white patches on the ceiling when they visited Madam Gan last Wednesday.

The three women are members of their neighbourhood Catholic community.

Madam Gan told her neighbours that she had engaged "HDB painters" to carry out "patching work".

When they asked how much she paid for the work, Madam Gan, whom they called "very absent-minded", showed them her cheque book and said she was told to issue cash cheques.

The neighbour said: "We noticed multiple cheques had been issued, and the total amount charged did not seem reasonable for the work done.

"We were worried she was grossly overcharged and may have been taken advantage of."

Two days after Madam Gan made a police report, the two men returned to her flat to ask why the $26,000 cheque had been cancelled.

Having forgotten about her trip to the bank and the police, Madam Gan was about to issue a new cheque when another member from the church community dropped by and saw what was happening, the neighbour said.

The friend quickly left to inform other members of the community. After a short discussion , they decided to call for police assistance.

After the suspects were taken away by the police, members of the community helped Madam Gan to tidy her flat while one of them helped to finish the painting job.

When TNP spoke to Madam Gan on Monday, she could not recall many details of the incident, including the amount of money she had paid the men.

She showed TNP her police report, which stated that she had issued four cheques to a man named Ah Leong.

She said that she was not given any receipt as proof of payment.

"I asked to get some proof from them, but all they said was 'okay okay' and nothing was given," added Madam Gan.

She said her husband died about 10 years ago.

Her two sons are living with their families and a daughter has died.

She also said that the man she knew as Ah Leong looked like a decent man and she had not expected him to be a scammer.

Police investigations are ongoing. Any person found guilty of cheating can be jailed for up to 10 years and fined.

For more details, visit www.scamalert.sg or call the anti-scam hotline on 1800-722-6688. Those with scam-related information can call 1800-255-0000 or submit information at www.police.gov.sg/iwitness