A Stomper's pursuit of otter family in CBD: More photos and videos of the furry creatures 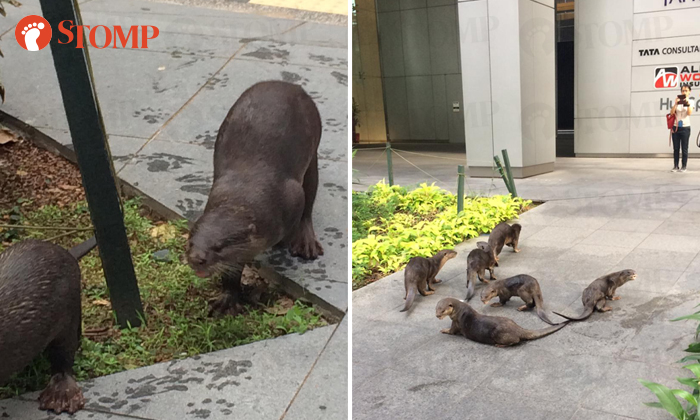 Remember the family of otters that were seen trying to cross the road in the Central Business District (CBD) on June 13?

The otters had caused quite a stir for many passers-by and Stomper N&S was one of them.

N&S said she followed the otters from International Plaza to Twenty Anson at about 8.43am.

N&S alerted Stomp via WhatsApp with more videos and pictures of the cute creatures.

She said: "My husband and I were on our way to work when I saw the otters running from International Plaza, towards Twenty Anson.

"We saw the security guard trying to ensure the cars would not hit the otters.

"In the first video, I chased them from International Plaza to Twenty Anson."

N&S ended her pursuit with another video of the otters taking a quick dip in the water fountain at Twenty Anson before they left a wet trail as they continued off to somewhere else.

She said: "They looked like they were about to cross the road towards McDonald's.

"The otters were avoiding people and weren't aggressive.

"My parents brought me to Sungei Buloh because I had mentioned wanting to take photos of otters, but we didn't get to see any.

"At one point, I was only a metre away from the otters. I felt so lucky!

"It was such a rare encounter to have caught sight of them, a great way to start my day before work."

"ACRES received several calls with regards to the otters at the CBD area.

"We are in touch with National Parks Board (NParks) and Otterwatch, and are monitoring the situation for now.

"We need to understand where and how they appeared in the CBD area to try and avoid similar situations in the future.

"It is not viable to catch and relocate the entire family as any attempt can potentially cause the otters to frantically disperse, increasing the chances of accidents.

"We urge members of the public to not crowd around the otters and give them space.

"We are thankful for members of the public who came forward to control traffic and ensured the otters had a safe path.

"We are an urban jungle with waterways and nature areas intersecting across the island.

"When wild animals move, very often they get stranded smack in the middle of urban areas with high human traffic."