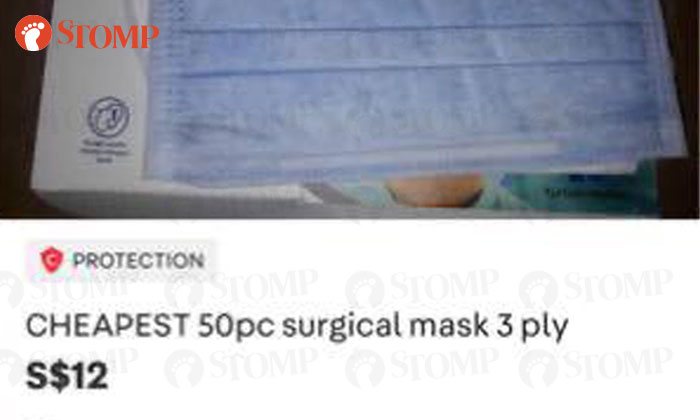 At least 600 people forked out about $189,000 to a woman selling 'cheap' face masks on Carousell only to have lost most of the money in an overseas scam.

One of the victims, Stomper Emm, alerted Stomp to the incident and shared that she had personally transferred $720 to Carousell seller "diywallpaper" for 60 boxes of masks.

The seller had advertised her listing as "cheapest 50pc surgical mask three-ply S$12".

This was irresistible to buyers like Emm amidst the spike in the price of face masks because of the spread of the coronavirus, or Covid-19.

"She posted her masks for sale in mid-February while there was a shortage of masks," she said.

"Out of desperation, many people like me saw such a cheap deal and went ahead and ordered.

"The young woman gave her particulars and said that the collection of masks would be at a beauty salon shop at Kovan.

"She also periodically posted updates in a WhatsApp group in anticipation of the arrival of the masks.

"She received payment for about 12,000 boxes in total and arranged to ship the masks in four batches.

"I happened to be in the third batch and according to her, she had not yet transferred money to the suppliers for the third and fourth batches of orders.

"At the end of February, she announced that she had been scammed and made a police report before informing us.

"Many of us asked for refunds.

"We feel she should be the one bearing the consequences instead of pulling all of us down with her.

"She told us in an update, that she would refund us but so far, she hasn't."

The Stomper added that several of those affected will be taking legal action.

In response to a media query, the police confirmed with Stomp that more than 100 reports were lodged against a Singaporean who sold surgical face masks on Carousell using the profile username "diywallpaper".

"Police investigations revealed that the Carousell seller had collected about $189,000 from at least 600 buyers and made payments of about $122,000 to two overseas suppliers claiming to be able to supply surgical face masks," a police spokesman said.

"However, the two overseas suppliers failed to deliver the surgical face masks.

"The Carousell seller has refunded some of the payments made to her, using the remainder of about $67,000."

The police said that after careful consideration of the facts and circumstances of the case and in consultation with the Attorney-General's Chambers, the police will not be taking further action against the Carousell seller for the offence of cheating as there is insufficient evidence to prove that the Carousell seller had an intention to cheat buyers when entering into agreements to supply them with surgical face masks.

Buyers who wish to pursue a civil claim against the Carousell seller may file their claims at the Small Claims Tribunals.

Related Stories
Stompers cheated of up to $600 by Carousell users selling face masks: 5 arrested in separate cases
Man who trolled scammer until he spewed vulgarities now leaves another caller speechless
Received message offering you loan from 'bank'? It's a scam
More About:
scam
Carousell
police