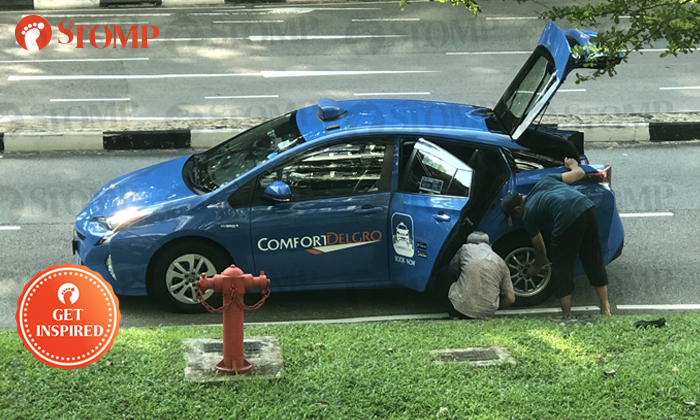 Motorists went on their own way along Yishun Avenue 11 on Wednesday afternoon (June 6), not paying much heed to an elderly taxi driver who was stranded by the side of the road.

The ComfortDelGro cabby tried to change his taxi's flat rear tyre on his own but to no avail, said Stomper LoveAOK, a resident living in the area.

She told Stomp: "It was around 4 to 5pm. At first, I noticed the taxi moving slowly and thought something had happened. His passengers, a family of three, alighted and left.

"The frail, elderly taxi driver looked helpless as he assessed the condition of the tyre. Many vehicles passed by the road but none stopped to help.

"I wanted to help but didn't know how. There were passers-by nearby who just looked on too. Perhaps they, like me, knew nuts about changing a tyre."

Even after 40 minutes, the taxi driver's efforts proved to be futile.

And his troubles would have persisted -- if not for a kind young man who passed by and rendered his assistance.

"The man’s random, inspiring act of kindness and heartwarming gesture restores my faith in humanity (it’s a pity though I didn't get a good snapshot of him)!

"The process, with the guy's help, took about 15 to 20 minutes. If it weren't for him, the taxi driver would probably take a longer time to change his flat tyre.

"Not all is negative about Yishun!"

Related Stories
Kudos to motorist and pedestrian for removing row of bikes left in middle of road at Yishun
Man deeply touched by NTUC Fairprice for providing food to break fast with at Yishun outlet
Cyclists spend 2 hours walking lost karung guni uncle back from Yishun Dam
Youth touched by auntie who bought him drink at Yishun eatery: "I want to pass it on"
More About:
kind
kudos
inspiring
cabby
taxi