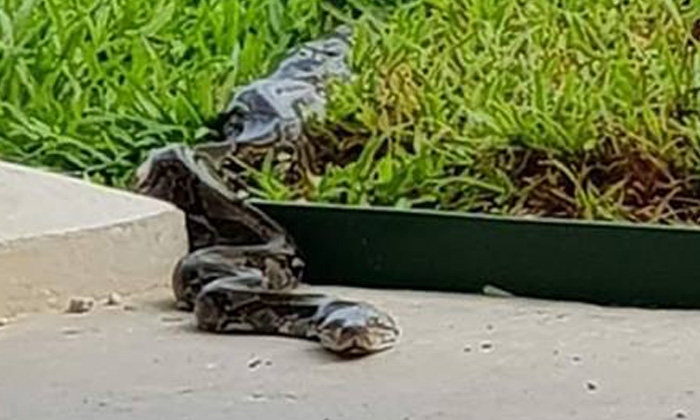 A python was spotted at a bus stop outside a polyclinic along Punggol Drive on Oct 8 at about 8am.

The Agri-Food and Veterinary Association of Singapore (AVA) told Stomp that they removed the python and handed it over to Wildlife Reserves Singapore.

In a photo uploaded by Facebook user Irah Nasirah, the python is seen crawling onto a concrete pavement from a grassy area.

Half of its body is on the concrete pavement while the other half is on a grass patch.

"Be extra careful especially when you are with kids ok," said the caption on the Facebook post.

"Always make sure you keep an eye out for them while waiting for the bus there."

In a phone interview with Stomp, Ms Irah said the photo was taken by her husband, Mr Halek Harun.

Mr Halek also told Stomp: "It looks like a Burmese python and was about 91 centimetres long.

In response to a Stomp media query, AVA said: "AVA was alerted to a case of a python near Punggol Polyclinic on Oct 8.

"The python was removed and handed over to Wildlife Reserves Singapore.

"AVA advises the public not to approach, disturb, feed or try to catch any wildlife, including snakes.

"Keep a safe distance from the animals and avoid confronting or cornering them.

"Do not interact with the animals, and ensure that young children and pets are kept away from them.

"The public can refer to the advisory on snakes on our website, and contact AVA at 1800-476-1600 to provide feedback or request for assistance."