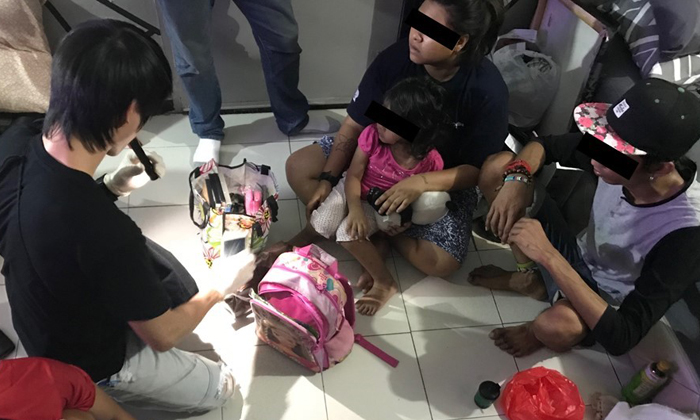 Ninety-one suspected drug offenders were arrested in an islandwide operation by the Central Narcotics Bureau (CNB), during which a four-year-old child was found within possible reach of 'Ice' in a flat at Chin Swee Road.

The operation, conducted by CNB with the support of the police, lasted from the morning of June 2 to the morning of June 7. It covered areas such as Bishan, Bukit Batok, Bukit Panjang, Choa Chu Kang, Clementi, Marsiling, Punggol, Tampines, Teck Whye and Toa Payoh.

In one case, CNB officers raided a unit that was found to be a "drug den" in the vicinity of Chin Swee Road on June 5.

"Two suspected drug traffickers -- a 29-year-old female and a 34-year-old male, both Singaporeans -- were arrested therein," said CNB in a news release.

Four suspected drug abusers were also arrested within the unit. They are a 22-year-old female, a 29-year-old male, and a 31-year-old male -- all of whom are Singaporeans -- as well as a 28-year-old Malaysian male.

A total of about 26g of 'Ice', a digital weighing scale and some improvised drug-smoking apparatus were recovered from within the unit.

CNB added in its statement: "A four-year-old girl, child of the 22-year-old female suspected abuser, was with the mother during the raid."

Officers noted that sachets of 'Ice' were strewn around the unit, within possible reach of the child.

CNB has worked with the Ministry of Social and Family Development’s Child Protective Services to ensure that the girl receives continued care under an immediate family member and is supported in the community with services.