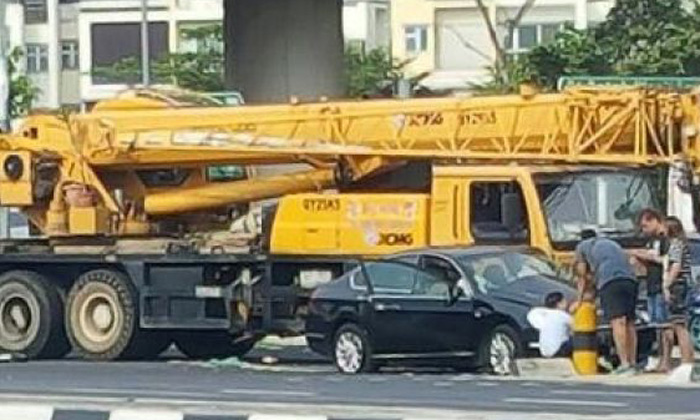 He was on his way to pick up his wife from work yesterday when a mobile crane crashed into his car, trapping his young son in the front passenger seat.

Thankfully, the nine-year-old made it out alive after he was pulled out, bloodied and crying, from the driver's side.

The accident happened as the black Nissan sedan was making a right turn into Bukit Batok West Avenue 5 from Bukit Batok Road at about 4.30pm.

The car driver, who is in his 30s and declined to be named, said he still felt giddy an hour after the accident.

"I was on my way to pick up my wife with my son," he told The New Paper.

The impact from the accident sent the car spinning, and the passenger door was jammed.

The mobile crane driver, who wanted to be known only as Mr Ng, 53, said this was his first accident in more than 30 years of driving a mobile crane.

"I swerved left in an attempt to avoid crashing head-on into the car," he told TNP.

"If I hadn't, would the boy still be alive?"

He said he helped the Nissan driver pull his son out from the damaged car, but the father denied this.

A Singapore Civil Defence Force spokesman said the boy was taken to National University Hospital in an ambulance.

He is believed to have suffered minor injuries to his back.

Pieces of tissue paper stained with blood were seen at the scene.

Mr Hasam Johar, 53, a civil servant, who was driving by at the time, said the boy's right arm was bleeding.

"The accident was quite bad. It blocked all vehicles going towards Brickland Road," he said.

"I was shocked when I saw the scene. The whole road was blocked by that monster crane."

He said the area sees many heavy vehicles, and motorists should be more careful when driving there.

"The boy is very lucky to even be alive," he added.