89 people, aged 16 to 94, hauled up in Geylang dragnet to clamp down on illegal activities 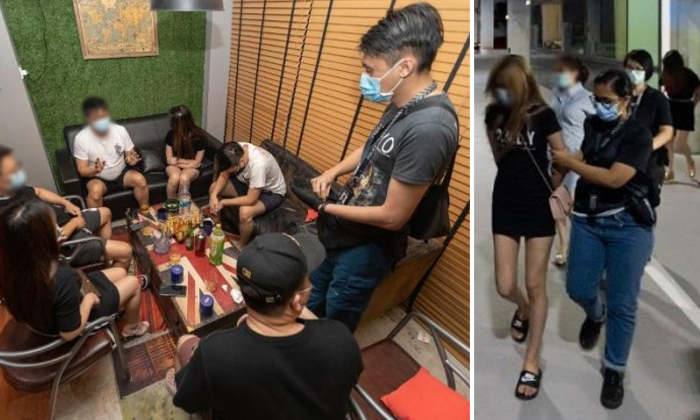 A week-long dragnet to clamp down on criminal activities in Geylang saw 89 people hauled up for various offences, the police said in a statement on Sunday (Dec 6).

Others were arrested for offences ranging from the sale of illicit medication to breaching Covid-19 regulations.

Over six days, from Tuesday to Sunday, officers from the Bedok Police Division led a multi-agency operation across Geylang, with officers from multiple agencies combing the streets as well as checking on massage and entertainment outlets, among other places.

During the raids, 20 men, aged between 23 and 55, were caught for the sale of illicit medication, drug-related offences and being a member of a secret society.

Among this group, four men, aged between 25 and 39, are being investigated for offences under the Health Products Act, with cough syrups, assorted brands of sexual enhancement and other pills with a street value of more than $13,800 seized from them.

The police also came down on illegal gambling activities, investigating 12 men and 15 women, aged between 21 and 94, for offences under the Common Gaming Houses Act.

Cash amounting to more than $69,500 and gambling-related paraphernalia were seized.

In one massage establishment, a 40-year-old woman was arrested for an offence under the Woman's Charter. The outlet was found to be operating without a valid licence.

The police also found public entertainment outlets that were operating illegally under the Covid-19 (Temporary Measures) Act 2020. They rounded up 24 men and 10 women who are being investigated for breaching public entertainment licence and liquor licence conditions, as well as for operating during prohibition and failing to comply with safe distancing measures.

As part of the sweep of entertainment outlets, one man and five women, aged between 16 and 42, were also arrested for offences under the Employment of Foreign Manpower Act.

Meanwhile, a 42-year-old man was arrested for offences under the Customs Act, with five cartons and eight packets of duty-unpaid cigarettes seized from him. The amount of duty and Goods and Services Tax evaded amounted to $540 in all.

Another four men and one woman, aged between 44 and 64, were involved in illegal hawking and were issued with summonses under the Environmental Public Health Act for hawking in a public place without a valid licence from the Singapore Food Agency.

They were selling second-hand goods, such as such as clothing and shoes.

The police said investigations against all the people nabbed are ongoing.

The commanding officer of the Geylang Neighbourhood Police Centre, Deputy Superintendent of Police Lee Ting Wei, said in a press statement: "This operation is part of a multi-agency effort to clamp down criminal activities in Geylang. I am grateful for the continued support of the various enforcement agencies, which will go a long way towards keeping Geylang safe and orderly."