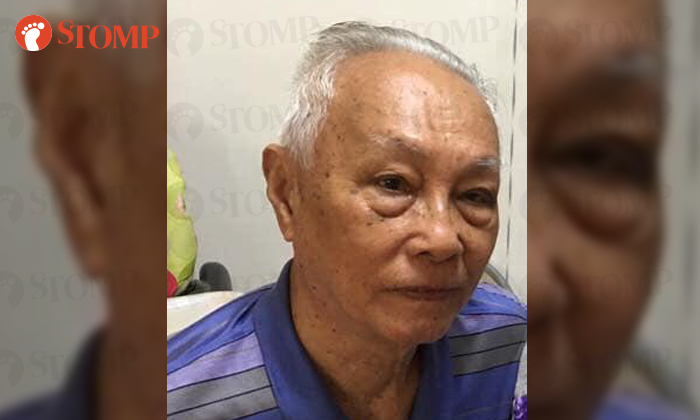 Mr Chua has been found.

Family members are looking for an elderly man who went missing after attending church on Sunday morning (July 7).

Francis Chua Kia Hua, 84, had visited the Church of St Francis of Assisi along Boon Lay Avenue on his own, but did not return home and has been missing ever since.

His grandson, Facebook user Edward Chua, posted an appeal for his return and said: "He's most likely wearing a striped t-shirt/polo tee."

A close family friend, Ms Jenna Ng, told Stomp: "Mr Chua's wife, who attended the second church session, spotted him when she was on her way in at around 9am.

"He was supposed to be heading home by taking bus service 99.

"The police told us that his EZ-Link card showed that he had tapped out at the Jurong East SPC petrol kiosk's bus stop, near Block 229. This is near his home."

According to Ms Ng, Mr Chua is blind in one eye and is hard of hearing.

He is described as tall and lanky. He also walks bent with the assistance of an umbrella.

Ms Ng added: "We go back many years, and I think of Mr and Mrs Chua as my own grandparents.

"I hope he is found safely and returns home soon."

If you have any information regarding the whereabouts of Mr Chua, kindly contact Stomp at stomp@stomp.com.sg or WhatsApp 9384 3761.

Related Stories
Missing 18-year-old girl returns home after 7 days, had left note: 'I'm not a good child'
Mum's 17-hour ordeal in search for missing sons: 'If anything happened to them, I would die'
FOUND: Family looking for elderly man with dementia who was last seen in Chinatown
More About:
missing
missing person
appeal