82-year-old man dies after getting knocked down by car in Bukit Batok, driver arrested 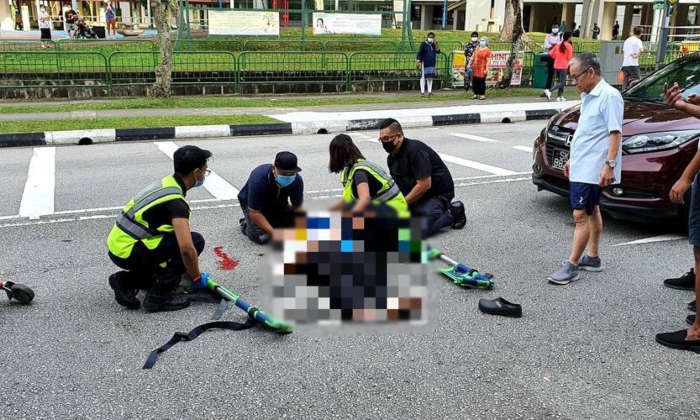 A 82-year-old man died from his injuries after getting knocked down by a car along Bukit Batok West Avenue 4 towards Bukit Batok Avenue 2 on Wednesday (Nov 11).

According to a Facebook post by ROADS.sg, a man named Afiq Sumardi was at the scene and recounted what had happened.

"I'm that big guy in the picture tending to the victim. No, he wasn't a cyclist, no, he wasn't walking behind or in front a bus at a blind spot. Please don't speculate," Afiq said.

"The paramedics were trying to resuscitate him in the ambulance. As with those who tended to the uncle, I was really hoping for a fruitful outcome, the news tells me otherwise, sadly."

Afiq also reminded netizens to slow down and be careful when driving around Housing and Development Board (HDB) estates.

According to Chinese-language newspaper Lianhe Zaobao, another eyewitness, known as Zhang, said he was at a nearby coffee shop when he heard a loud thud.

When he turned around, he saw an old man lying on the road.

Zhang also shared that the old man probably did not notice the oncoming car when he crossed the road.

He said the old man was bleeding from his mouth and lying on the ground as passers-by who witnessed the accident came forward to help.

Zhang mentioned that this is not the first serious accident that has occurred along this road. A few months ago, there was another road accident involving a cyclist.

In response to a Stomp query, the police said they were alerted to the accident involving a car and a pedestrian at 8.33am.

"The 82-year-old male pedestrian was unconscious when conveyed to Ng Teng Fong General Hospital, where he later died from his injuries," added the police.