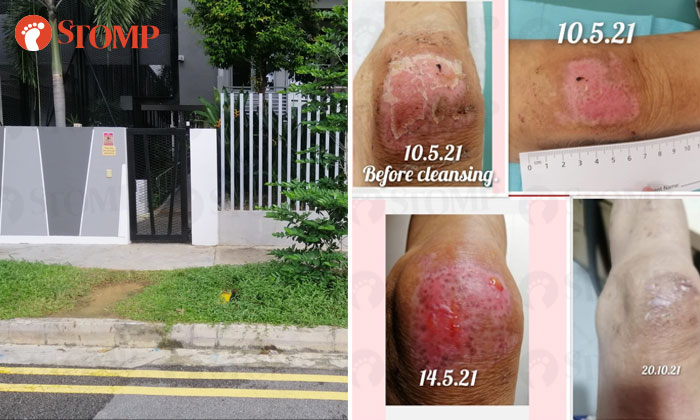 The police are investigating an incident where a Grab cyclist allegedly crashed into an elderly pedestrian outside the Guillemard Edge condominium in Geylang on Apr 20.

The pedestrian, an 80-year-old man, shared with Stomp photos of the injuries he sustained from the accident.

"I had just exited the condominium onto a footpath when a Grab cyclist crashed into me," the Stomper said.

"I was thrown about seven feet away and landed on a metal cover.

The Stomper said he was flung from point X to Y.

"I suffered a severe injury to my right knee and a patch of skin was scraped off.

"My left arm and shoulder had lacerations."

The man told Stomp he lives alone and has experienced "excruciating pain" every time he needs to go out to buy meals or to visit the neighbourhood polyclinic for treatment.

"It took a whole month for the wound to heal," he said.

"The secondary skin itches and is very sensitive."

He has reached out to Grab regarding the incident and has since made a police report.

The Stomper added he decided to share what happened to him after reading about a similar incident on Stomp where a Grab rider on a personal mobility aid (PMA) collided with a woman exiting the Bellewaters condominium in Sengkang on Oct 21.