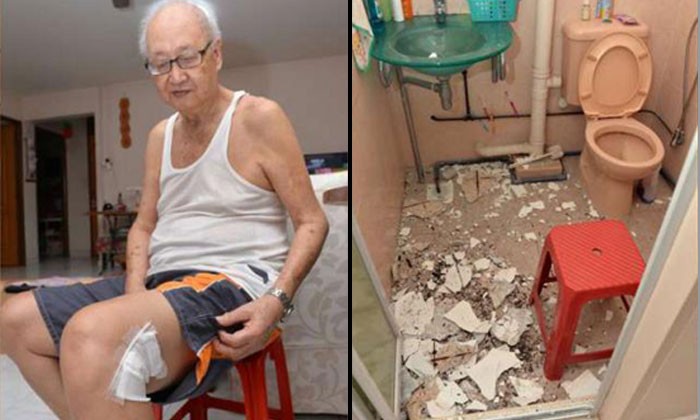 An elderly man suffered scrapes and cuts after a concrete slab fell from the ceiling of his daughter's flat and landed just next to him.

The 80-year-old was staying over at his daughter's flat at Blk 141 in Yishun Ring Road when the incident occurred on Friday (Jan 6), Shin Min Daily News reported on Sunday (Jan 8).

It was about 9pm, and he was using the toilet attached to the master bedroom in the flat.

As he stood up from the toilet bowl, a slab of concrete fell close to him, right in front of the basin, he told the Chinese evening daily.

It was so close that the slab slashed through his clothing and cut the side of his left knee.

One of his toes was also injured.

"If I had walked to the basin one second earlier, it could have hit my head," he told Shin Min. He has seen a doctor and received a tetanus jab as a precaution, he said.

His daughter said that the flat is more than 30 years old and has not undergone upgrading under the Home Improvement Programme.

She said that officers from the Housing & Development Board (HDB) have visited the flat to check the ceilings.

It is understood that pieces of concrete also fell from the unit's other toilet, and the kitchen ceiling has signs of unevenness.

In response to queries, HDB said it was first alerted to the incident at Blk 141 Yishun Ring Road on Friday, and it arranged for its officers to conduct a flat inspection the next day.

"Upon investigations, we found that there was spalling concrete in the master bedroom toilet. It is non-structural in nature and will not affect the building's structural integrity," said a HDB spokesman.

The flat owner has accepted HDB's subsidy to repair the spalling concrete under the Goodwill Repair Assistance Scheme.

Under the scheme, the owner and HDB will share the cost of repair equally.

"We will make arrangements for the repair and update her on the details," said the spokesman.

Spalling concrete is largely due to a natural deterioration process which occurs in older buildings, the spokesman added, pointing out that the flat in this case is 32 years old.

Regular maintenance by flat owners will minimise such problems.

The carbonation process which causes spalling concrete can be slowed down or prevented, by regularly painting the ceiling every three to five years using anti-carbonation or good quality paint.

In addition, if there are cracks or holes drilled in the ceiling that are no longer in use, they should be sealed immediately to prevent moisture and air from entering the concrete, said the spokesman.