80 evacuated after fire in Ghim Moh Road flat, including family on quarantine order 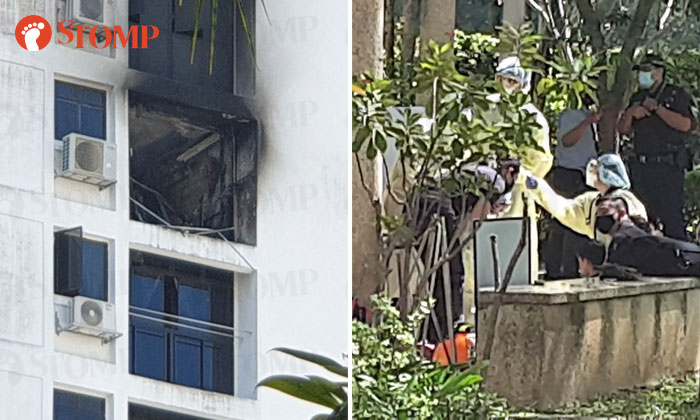 The family of six was on quarantine order but, together with their helper, fled from their flat as their neighbour's unit below caught fire.

Wanting to be known only as Mr Alfred, 40, the educator said they had to choose between running or suffocating in their home.

So Mr Alfred, his wife, three children and mother-in-law took the lift down and ran towards their neighbours who had gathered at the foot of the block.

Thick black smoke was seen coming from the unit.

Mr Alfred, who lives two storeys above the affected apartment, said his family initially thought it was just someone burning incense.

But the smoke soon became unbearable.

Then, personnel from the Singapore Civil Defence Force (SCDF) arrived and told them to evacuate.

Said Mr Alfred: "It was not ideal, but under the circumstances, we had no choice. The whole thing happened fairly quickly as the smoke became dark very fast.

"But even when we escaped downstairs, we made sure to keep a safe distance from everyone else because we're still on our last day of QO (quarantine order)."

He said their helper had tested positive for Covid-19, hence the quarantine order for the family. He said they have been testing negative for the virus over the past few days.

SCDF said about 80 people were evacuated from the block.

Firefighters had to force their way into the unit to extinguish the blaze which involved the contents of the living room.

Two women, aged 36 and 81, were taken to Singapore General Hospital with smoke inhalation, while one person declined to be taken to the hospital.